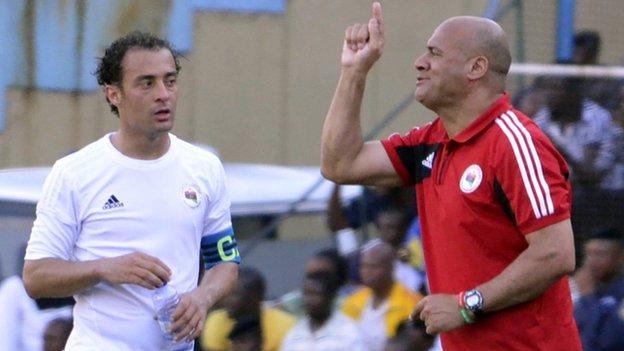 Libya suffered a setback to their hopes of playing at the World Cup for the first time when they were held 0-0 by the Democratic Republic of Congo on Friday.

Playing their first competitive home match in Tripoli since 2010, the Mediterranean Knights wasted a great early chance when captain Ahmed Osman failed to convert a penalty.

A drive from substitute Mohamed El Gadi with 10 minutes left finished just off target in a Group I qualifier that produced few scoring chances at the national stadium.

Libya had been unable to stage home games in the country because of a tense security situation following the overthrow of Colonel Gaddafi.

The result was the same as the first match between the countries in Kinshasa three months ago, and a massive disappointment to Libyan supporters.

They remain second in the table, level on six points goal difference with Cameroon, but behind the Indomitable Lions because they have scored fewer goals.

Cameroon, whose six World Cup appearances is a record for an African country, are away to Togo on Sunday and a win would move them three points clear.

Meanwhile, Ghana completed the double over Sudan with a 3-1 win in their World Cup qualifier at the Al Marreikh Stadium in Omdurman.

Two goals from captain Asamoah Gyan and a superb strike from Sulley Muntari sealed victory for the Black Stars who played with 10 men for most of the match after the first-half dismissal of Richard Boateng.

The result propelled the Black Stars to the top of Group D, two points ahead of Zambia but having played a game more.

Ghana beat Sudan 4-0 in the reverse fixture at the Baba Yara Stadium in Kumasi but Friday's win has thrown down the gauntlet to the Zambians who meet Lesotho this weekend.