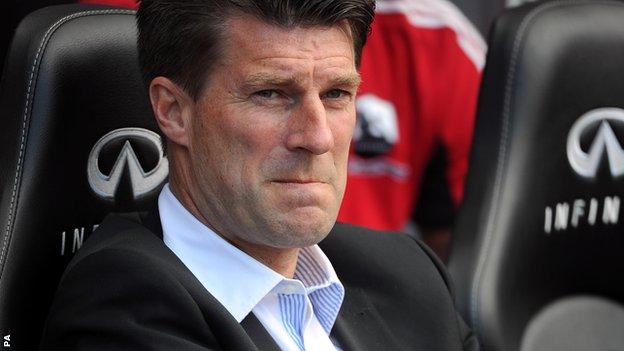 Swansea manager Michael Laudrup has reiterated his intention to stay at the club but has urged the board to make quicker progress on transfer targets.

On Thursday, chairman Huw Jenkins had to deny reports of unrest between club and manager over transfer funds.

"I have always said that my intention was, and is, to stay," Laudrup said.

"I think all the speculation regarding my future is due to the fact that there hasn't been any good news since we played our last game three weeks ago."

Jenkins insisted Laudrup will have "substantial" money to spend and that the Dane was happy with the agreed transfer targets.

Swansea also confirmed their first recruit of the summer on Thursday with the signing of Real Betis midfielder Jose Canas.

But Laudrup, who succeeded Brendan Rodgers in June 2012, says he thinks a lack of activity has resulted in the rumours about his future.

"We all need some good news," Laudrup told the South Wales Evening Post.

"I had hoped for some signings at this stage but I think this is a question to ask to the chairman and the board.

"They have all the names of the possible players for our team and all the players, except one, are in Swansea's level when we talk about transfer and salary.

"It is almost three weeks since we played the last game and everyone is looking forward to receiving some news regarding new players.

"Instead people can read in different papers and media that there are bigger and bigger problems with me, the chairman, the board, my agent or players who will not join Swansea because they are not sure that I will stay."

Laudrup guided the Swans to victory in the Capital One Cup in his first season at the Liberty Stadium.

But the former Real Madrid player suggested he needed to spend a "couple of hundred million pounds" on new players to improve on their ninth-place finish in the Premier League.