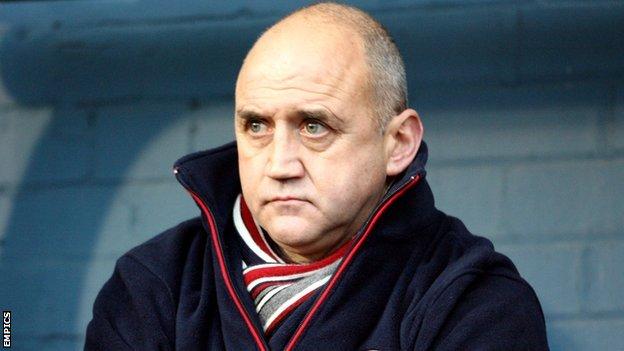 Cambridge United boss Richard Money has said he has rejected the opportunity to manage a new Indian club and will stay with the U's.

Money, 57, had been in talks with Bangalore-based Jindal Vijayanagar Steel as they prepare for a debut season in the I-League's top division.

"It was something no-one could dismiss out of hand," former Luton manager Money told BBC Radio Cambridgeshire.

"I gave it a lot of thought and I'll still be here next year."

Money has experience of managing abroad, with AIK and Västerås SK in Sweden and Australian club Newcastle Jets.

Jindal Vijayanagar Steel, sometimes known as Jindal Steel Works (JSW), are one of two new teams accepted into the 2013-14 I-League campaign and reports had emerged that Money was in line to become their first manager.

"It's a really big project and the people have been really impressive," said Money.

"It was very tempting and very flattering to be involved in. But you can't do both jobs unfortunately."

Money, a former Liverpool defender, joined the U's in October last year and led the club to a 14th-placed finish in the Conference Premier, while overseeing a series of budget cuts.

But the Abbey Stadium side have recruited heavily ahead of next season, with eight signings arriving.

"I've been very open with Jez [George, Cambridge director of football] and the club," said Money.

"We've all discussed it at length and all that anybody knows is that I'm staying at Cambridge.

"If I didn't feel I had the support here it would have made the decision easier."