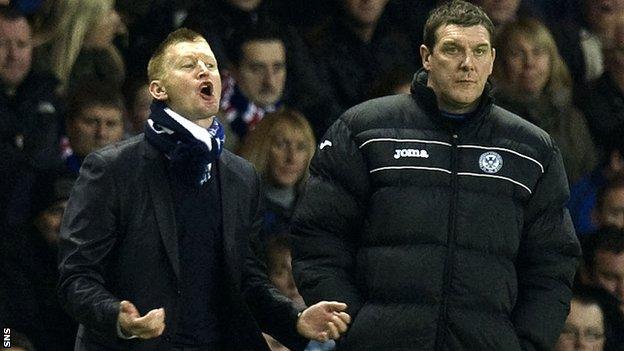 St Johnstone chairman Steve Brown says Tommy Wright is a "strong candidate" to replace manager Steve Lomas, who is leaving to take over at Millwall.

But Brown has already received notice of five "top quality" applicants and will not rush into a decision.

Wright, 49, has been assistant to Lomas at McDiarmid Park since the pair moved to the Perth club in November 2011.

Former Saints players Paul Hartley and Paul Sheerin have already been linked with the post.

Hartley has taken Alloa from Division Three to Division One in two seasons, while Sheerin is at Division Two Arbroath.

Millwall have agreed compensation terms with St Johnstone, and Lomas will start work at The Den when he returns from holiday next week.

And Lomas is the third consecutive Saints boss to leave for a Championship club, following Derek McInnes and Owen Coyle, who joined Bristol City and Burnley, respectively.

"It's only just happened so I'll need to draw breath and think it through carefully before deciding on what to do," Brown told BBC Scotland.

"I've already had some very surprising and good applications but I'll not rush into anything.

"If I can do it quickly I will, but I'm prepared to take my time to get the right man."