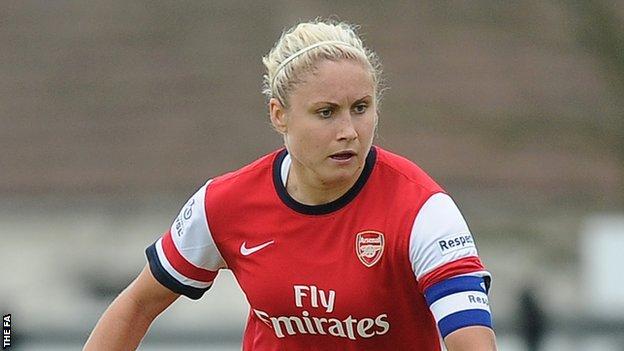 England's Euro 2013 preparations were dealt another blow as Arsenal's Steph Houghton was injured in a 2-1 Women's Super League win against Chelsea.

Gilly Flaherty and Alex Scott were on target for Arsenal before Eni Aluko replied for the Blues.

Houghton fell badly in the seventh minute and, though she played on, had to be substituted eight minutes later.

"I rolled my ankle and it's feeling sore, but I'm hoping it's nothing major," said Houghton.

"I'll be getting a scan on Friday and our physio feels pretty positive about it, so I'm looking on the bright side and praying for a good outcome."

If the ligament injury turns out to be more than temporary it will be a case of the left-back curse striking England yet again.

Two occupants of the position, Birmingham City's Rachel Unitt and Chelsea's Claire Rafferty, have already been ruled out of the Euros through injury.

And though Houghton, the Arsenal captain, plays in midfield for her club, she is England manager Hope Powell's first choice at left-back.

The national coach was watching the match at Borehamwood and she at least saw good displays from several players vying for positions in her Euro squad.

Chelsea striker Aluko started brightly and went close to opening the scoring with a 20th-minute run that took her just too wide to force the ball home.

The lead should have been doubled in the 36th minute but midfielder Jordan Nobbs, enjoying a fine first season for England, blazed over from five yards.

Arsenal goalkeeper Emma Byrne saved well at the feet of Aluko as the visitors pressed for an equaliser before the interval.

But in front of a crowd of 1,113, the Gunners regained control after the break and keeper Carly Telford had to make diving saves from Nobbs and England winger Rachel Yankey.

Telford could do nothing, however, to keep out Scott's 12-yard shot on the hour after the England right-back had swapped passes with Nobbs.

The Blues looked out of the game but were handed a path back through poor defending in the 64th minute.

Jennifer Beattie dawdled on the ball on the edge of the penalty area and Aluko robbed the left-back to score after winning a brief tussle with Byrne.

That was the signal for the visitors to go all out for an equaliser, but Arsenal held out with no great scares to clinch victory.

The win lifts them level on points with Chelsea, who remain third in the table on goal difference. The Gunners have played two games fewer than their London rivals.