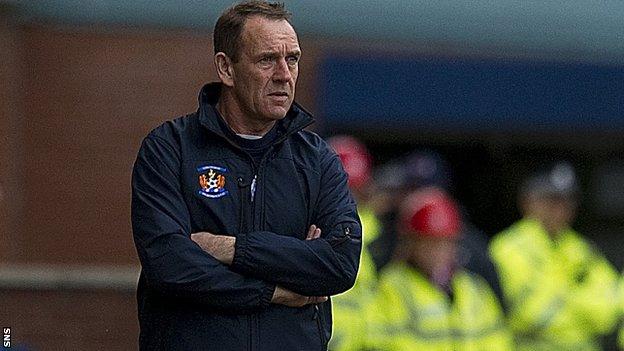 Kilmarnock manager Kenny Shiels will be in the stands when next season opens after picking up another touchline ban.

Shiels was given a four-match suspension for bringing the game into disrepute, with two of those suspended until the end of the campaign.

He was charged with questioning the impartiality of the SFA's judicial panel and the integrity of Celtic.

Kilmarnock were also found guilty of failing to ensure that Shiels complies with SFA protocol.

The penalty for the separate charge against the club will be decided on 21 June.

"We are the oldest professional football club in Scotland and are therefore extremely unhappy to have this against our name.

"We now need to take stock of the findings and sit down with Mr Shiels to discuss the best way forward."

In a BBC Radio Scotland interview conducted in late April, Shiels said Celtic had "massive influence" over disciplinary hearings, referring to them as "the monster of Scottish football".

The 57-year-old later expressed concerns that his comments had been taken out of context by a newspaper.

Shiels was served with two separate notices of complaint from the SFA in November, following critical remarks made about referee Euan Norris and his dismissal from the dugout in another match.

In January, Shiels was given a four-match ban when found guilty of two rule breaches for accusing fourth official Andrew Dallas of "fabrication" of evidence.