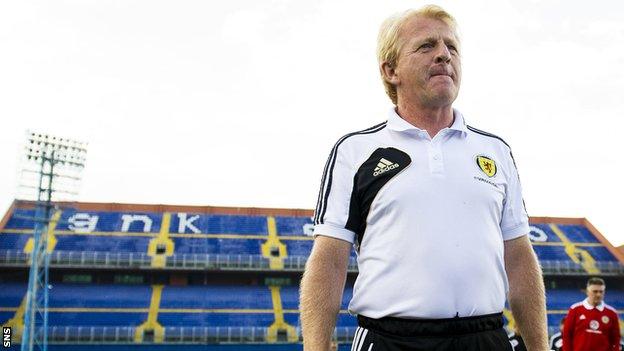 Consistency. A cornerstone word in the vocabulary of football managers.

It is uttered in dismay by those in charge of underperforming sides and proclaimed with satisfaction from contented winners.

Scotland have been depressingly dependable in a dreadful World Cup qualifying campaign: no wins, two points and three goals from six matches.

For a model of positive consistency Scotland can cast an envious eye at Friday's opponents Croatia.

The Balkan nation, with a population smaller than Scotland's, regularly overachieves, reaching seven of the nine major tournaments since gaining independence in 1991.

A passionate and hugely experienced squad is peppered with talent, while a precocious group of youths wait impatiently for their chance to shine.

Defenders Josip Simunic and Darijo Srna boast more than 100 international appearances, along with goalkeeper Stipe Pletikosa, and coach Igor Stimac can call on six more regulars with more than 50 caps.

And the players are fiercely proud - there are no early retirements. Indeed, former skipper Niko Kovac agonised about stepping down in 2009, at the age of 37.

Mateo Kovacic and Alen Halilovic are much-lauded teenagers but places in a settled team are hard to come by.

Seven players have started in five of the six qualifying games, with five appearing in every match.

And those fixtures have yielded five victories, with a draw earned away to Group A leaders Belgium.

In total, Stimac has utilised 20 players in this campaign. That's three fewer than Gordon Strachan has used in his three matches in charge of Scotland.

Scotland have already been through 30 players on the doomed quest for a place at Brazil 2014 and nine men who have yet to feature are included in a patched- up squad for the game in Zagreb.

When Simon Donnelly appeared as a late substitute in a 2-0 win over Latvia in 1997 he was the 27th player used by manager Craig Brown in Scotland's last successful qualifying adventure.

On the road to France 98, Scotland lost only one of 10 games to finish group runners-up behind Austria.

Darren Fletcher, Scott Brown, James Forrest and Steven Fletcher have missed the majority of games through a combination of injury and a stand-off with Levein in the latter's case, and Scotland can ill-afford to lose their best players.

Previous managers relied on a stubborn defence to make Scotland competitive but Strachan does not really have the resources to play that way. Centre-half is a troubling area of weakness, as is left-back.

Goalkeeper Allan McGregor is an established performer at international level and Hutton has shown he has what it takes, only for his form to dip.

Blackburn duo Grant Hanley and Jordan Rhodes offer promise for the future but there are experienced players who must lead the way if Scotland are to recover from the current malaise.

Midfielders James Morrison, Shaun Maloney and Robert Snodgrass are influential for clubs in the wealthiest league in the world, regularly turning in impressive displays.

Those men need to find their feet at the next level, while Champions League involvement for Celtic's Brown, Forrest and Charlie Mulgrew augurs well for fixtures to come.

On the day of his appointment, Strachan spoke of finding "a system that suits these players" and that may take some patience.

Now there is a word that is seldom used in the lexicon of football.