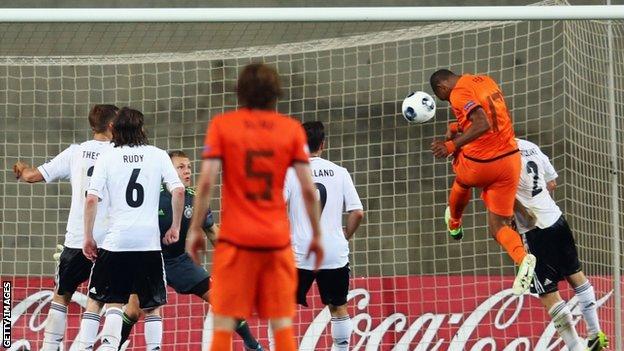 Former Everton target Leroy Fer came off the bench to head a last-minute winner as the Netherlands beat Germany in the European Under-21 Championship in Israel.

The Dutch were in control at half-time thanks to fine goals from Adam Maher and Georginio Wijnaldum.

But a Sebastian Rudy penalty and solo strike from Tottenham midfielder Lewis Holtby levelled the scores.

Fer, who won it right at the end.

Twelve members of the Netherlands U21 squad have won full caps.

It was a dramatic climax to a superb game which illustrated the quality on show in Group B, which also includes holders Spain.

Germany, who won the tournament in 2009 with an emphatic 4-0 victory over England in the final, started slowly as their more experienced opponents controlled the game.

Holtby is the only member of the German squad to win a full cap, while the Dutch Under-21s boast 12 full internationals.

And it was the Netherlands who took the lead midway through the first half when a short corner was laid off by Ola John to Maher 20 yards out, and the AZ Alkmaar playmaker hammered in a curling shot which swerved past the dive of Bernd Leno.

They deservedly doubled their lead when PSV Eindhoven's Wijnaldum collected the ball with his back to goal, turned and ran past two challenges before thumping in a shot which Leno could only help on its way into the net.

The Germans had been run ragged at times but found a way back into the match when they won a penalty 37 seconds into the second half.

A smart pass found Holtby and he took the ball around goalkeeper Jeroen Zoet, who brought him down and was lucky to only be shown a yellow card.

Hoffenheim midfielder Rudy took the spot kick and made no mistake, sending the keeper the wrong way.

Another Hoffenheim youngster, striker Kevin Volland, then smashed a shot against the crossbar after a smart turn 25 yards out, before substitute Christian Clemens curled a shot past the post as Germany continued to pile on the pressure.

Holtby, who was inspirational in the second half, thought he had earned a deserved point for his side when he struck with nine minutes remaining.

He received a throw-in on the left corner of the area, span away from marker Stefan de Vrij, beat another tackle and flashed in a low shot which beat Zoet and found the corner.

The German celebrations were curtailed though as Fer, nicknamed 'The Bouncer', showed all his power to climb over a defender and smash home a close-range header to give the Dutch victory.

In the day's earlier game, Spain scored a late goal to secure a deserved 1-0 win against Russia.

The holders were on top throughout, with Malaga midfielder Isco - a rumoured transfer target of Manchester City - prominent, but were frustrated until substitute Alvaro Morata broke the deadlock on 82 minutes when he headed in Thiago's free-kick.