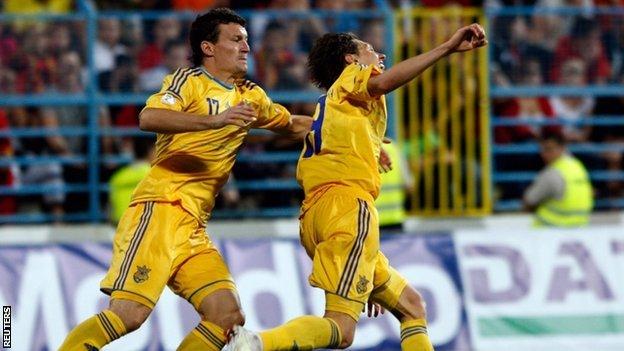 England's hopes of securing automatic qualification for the 2014 World Cup were boosted as Group H leaders Montenegro lost 4-0 at home to Ukraine.

Montenegro remain two points clear of second-placed England but have played a game more than Roy Hodgson's side.

Also in Group H, Poland dropped points as they could only manage a 1-1 draw in their away match against Moldova.

Only the group winners are guaranteed a place in the finals in Brazil and Montenegro missed the chance to move five points ahead of England.

Ukraine, who had Roman Zozulia sent-off in the first half, won comfortably thanks to goals from Denys Garmash, Yevhen Konoplyanka, Artem Fedetskiy and Roman Bezus, while Montenegro ended with nine men with Vladimir Volkov and Savo Pavicevic dismissed.

Poland dropped down to fourth behind Ukraine, despite scoring in the seventh minute through Jakub Blaszczykowski, before Moldova equalised with Eugeniu Sidorenco's goal.

The next matches in the group are on 6 September when Ukraine play at home against San Marino, Poland entertain Montenegro and England host Moldova at Wembley, before Roy Hodgson's team then travel to Ukraine four days later.

In Group A, Scotland won 1-0 in Croatia and Everton's Marouane Fellaini was on target for leaders Belgium in their 2-1 victory against Serbia.

Robbie Keane's hat-trick gave Republic of Ireland a 3-0 win against Faroe Islands and took Giovanni Trapattoni's side up to third in Group C.

Italy are four points clear at the top of Group B as they claimed a point in Prague, despite Balotelli's dismissal following two bookings in the space of four minutes.

Manchester City striker Edin Dzeko scored in Bosnia-Hercegovina's 5-0 success in Latvia, while former Tottenham forward Helder Postiga netted the only goal of the game in Portugal's 1-0 win against Russia, a victory that took Portugal top of Group F.