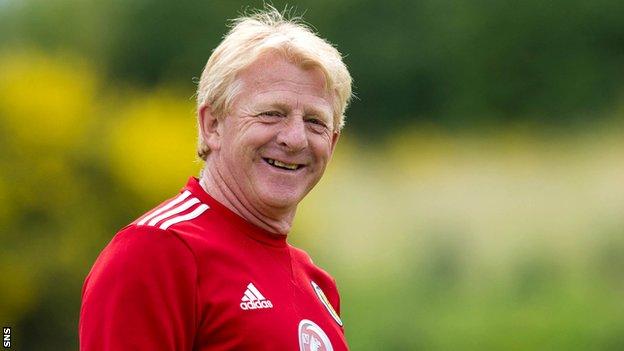 Gordon Strachan is sure his callow Scotland squad have prepared as well as possible for Friday's World Cup qualifier in Croatia.

But the manager is braced for a tough night against experienced opponents.

"When you are as good as they are, you probably decide the tactics for the other team most of the time," he said.

"We've put the hours in. We can't do any more as a group. But there will be times when Croatia will be dominating. They do it against most teams."

Croatia go into the game in Zagreb fourth in the world rankings and joint top of the group with Belgium, while Scotland sit bottom of Group A with just two points from six matches.

The visitors are also hindered by the absence of a host of key players through injury.

"It's going to be hard," admitted Strachan. "The squad is young. Some of our players don't even play European football, so it's imperative they get some kind of training for big games.

"But, for all our hard work, we know we are playing against world class players."

Scotland's three previous meetings with Croatia have all ended in draws and another similar result would delight the visiting manager.

Asked what would be a positive result, the former Celtic boss replied: "To get some sort of points from it and for everybody to get back on the bus and say: 'I did as well as I could'.

"That's the coaching staff, players, everybody.

"It's a me situation where every player must decide whether they are going to have an average game or a good game. If you can't have a great game then they have to be good team-mates."

Croatia and Belgium are unbeaten in their six group matches, winning five and drawing when they met each other in Brussels.

"Croatia have been good side for 20 years now," added Strachan.

"We see them at all of the major tournaments and they add to the occasion that's for sure.

"They have a good variation of play. They can pass it short or go long.

"With some teams you know what's coming but I believe Croatia have players that can adapt to all kinds of conditions, so we have to be on our toes."

Strachan will be relieved that Real Madrid playmaker Luka Modric misses out through suspension but the hosts boast a number of other top talents, including Darijo Srna and Mario Mandzukic, who scored in the Champions League final for Bayern Munich.

"Mandzukic is a top player," said Strachan. "We all know what he can do. It is up to us to find a way to stop him.

"I've enjoyed working with the players. They are a great bunch. Overall, I think this has been a great experience for some of the younger ones.

"This is a tough challenge but one we have to meet. The main thing is to be competitive."