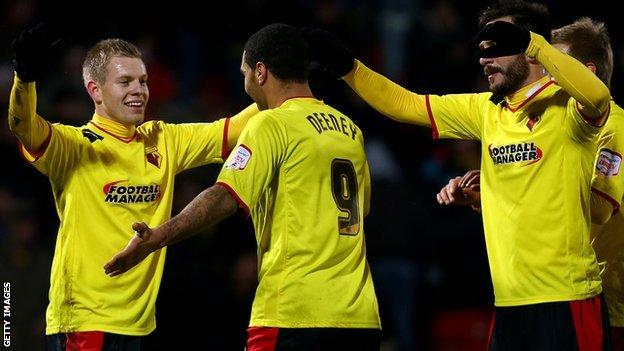 The Football League has voted to restrict the use of overseas loans after Championship club Watford brought in 10 players from Udinese last season.

Watford, whose owners also own the Italian side, came within a game of promotion, losing the play-off final.

The Football League has limited match-day squads to five loanees, with four from any one club - in line with quotas for domestic loans.

Currently overseas loans are regarded as full transfers, so not limited.

A spokesman for the Football League said, "The proposal was voted for unanimously."

The influx of players from Udinese and Granada, who are also owned by the Pozzo family, into Watford's ranks was after the two teams had drawn 2-2 in February.

The Hornets had named seven loan players in their squad for the match, but only Nathaniel Chalobah, on a temporary deal from Chelsea, counted towards their official loan quota.

Their line-up also included Czech striker Matej Vydra, on loan from Udinese, who scored 22 goals en route to landing the Championship Player of the Year award.

"That gives a licence to people to buy English clubs, chuck all their players over here and have a reserve team," said Holloway at the time.

"What if Barcelona wanted to buy us and play their 'B' team for us? We've got to sort this out."

Watford, who are currently under a transfer embargo until 31 August because of their previous owners' financial irregularities, have said they will try to secure the best of their loan players on a permanent basis for next season.

The Football League, which appointed a working party to look at the issue following complaints, required 51% of their 72 members to vote in favour to change the rules.