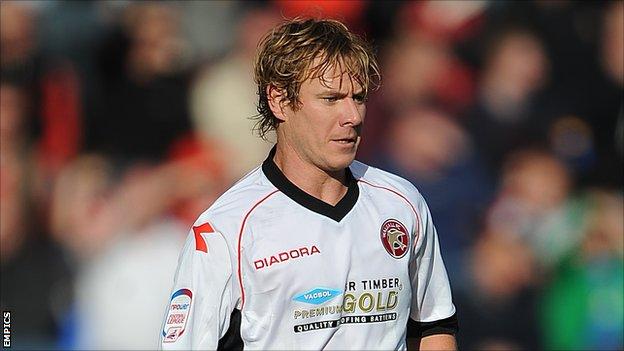 Walsall defender Dean Holden has signed a new one-year deal as player-coach at the League One club.

The 33-year-old, who joined Walsall in July 2012 following his release by Rochdale, has been rewarded for an excellent first season at Bescot.

"I am really pleased to have secured Dean's services for at least another year," said manager Dean Smith.

Holden will take on a dual role as development coach, looking after players in the 18-21 age group.

"He spoke to me during the course of last season about his desire to break into the coaching side of the game," added Smith. "And he has been working hard to get his coaching badges recently.

"The experience and knowledge of the game that he has combined with the respect that he commands throughout the club means that he has all the attributes needed to help develop our young professionals.

"He is a tremendous character to have around the place and, as was proved at the start of last season, he is also a very able centre-back, who will provide competition to the likes of Andy Butler, Paul Downing and Matt Preston."

Holden said: "To be offered this dual role is perfect for me. I'm absolutely buzzing. I've loved every minute of my time here.

"It's such a great environment in which to work and learn. The gaffer has been brilliant from the first time I met him and Richard O'Kelly has a wealth of knowledge on the game.

"This is an unbelievable opportunity to prolong my playing career and also take my first steps into coaching."