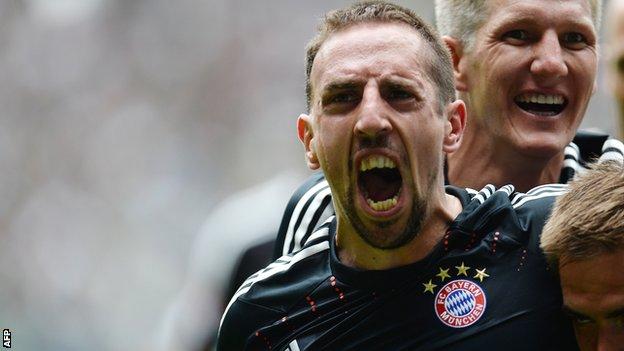 Bayern Munich winger Franck Ribery has signed a two-year contract extension to stay with the Champions League winners until 2017.

The Frenchman, 30, helped his side become the first German team to win the Bundesliga, the European Cup and the German Cup in the same campaign.

Bayern are the first German team to win the treble of league, main domestic cup and European Cup in the same season.

"We are delighted to have kept two key players with us," said Bayern chief executive Karl-Heinz Rummenigge.

Ribery played 43 games in all competitions for Bayern last season, scoring 11 goals, as he played a key role in helping them secure their historic treble.

The France international, who signed for Bayern in 2007 from Marseille, played a part in both goals in their 2-1 Champions League final triumph over Borussia Dortmund at Wembley in May.

Van Buyten, who played 23 games last season, was out of contract this summer but has extended his stay for another year.

The Bavarian club, who welcome former Barcelona coach Pep Guardiola as their new manager on 26 June, finished the season with 15 wins from their final 16 matches and only suffered one defeat after October.

"Franck and Daniel were outstanding in the past season and we counted on them to make the difference in the crucial games," added Rummenigge.