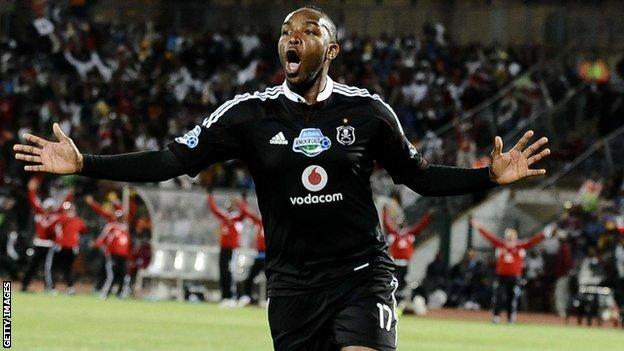 South Africa's all-time leading scorer Benni McCarthy has retired from football at the age of 35.

McCarthy has been playing for Orlando Pirates since 2011 after leaving West Ham by mutual consent.

In a statement on the Premier Soccer League website, McCarthy said: "Football has been good to me - it has provided special moments and enabled me to be in a position to have improved the lives of my family members.

"For that, I am most grateful."

Cape Town-born McCarthy played in the top leagues in the Netherlands, Spain, Portugal and England, winning the Eredivisie with Ajax and the Portuguese title and 2004 Champions League with FC Porto under Jose Mourinho.

"I have been so blessed to have enjoyed a remarkable career that took me from the township fields of Nyanga Stadium, to winner's medals in the Uefa Champions League and World Club Cup - the highest levels that a player can achieve in club football," he added.

He retires as South Africa's leading scorer with 31 goals in 80 games.

Although he was dropped from the final squad when the country hosted the 2010 World Cup, McCarthy scored goals for Bafana Bafana at the 1998 and 2002 tournaments.

He returned to South Africa after spells with Blackburn and West Ham in England's Premier League, joining Soweto giant Orlando Pirates in 2011.

He won four trophies with Pirates in 2012, including the league title after scoring on debut, and then twice in the title-clinching game.

"It has been a 17-year professional career that surpassed even my own expectations," McCarthy said.