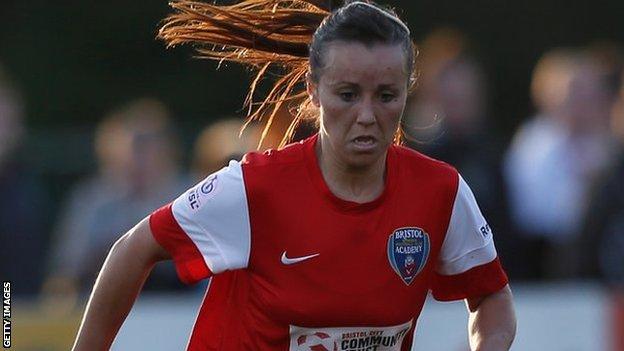 Bristol Academy moved level on points at the top of the Women's Super League with a 2-0 win at Birmingham City.

Strike partners Natalia and Natasha Harding were on target with second-half goals to end the Blues' unbeaten record - the last in the WSL.

Both sides looked to attack from the early stages but neither came close to scoring in the first half.

In the opening 15 minutes Harding and Birmingham's Rachel Williams both sent 10-yard efforts wide of the target.

As the home side continued to press, Williams's strike partner Kirsty Linnett had a shot blocked, then midfielder Jade Moore was just wide four minutes before half-time.

But five minutes later Bristol took the lead as Spaniard Natalia took advantage of a defensive mix-up to slot home her eighth goal of the season.

And four minutes from time a poor clearance by keeper Marie Hourihan led to substitute Laura del Rio crossing for Harding to tap in the victory clincher.

The result left Academy second only on goal difference to leaders Liverpool, while Birmingham remained fourth in the table.