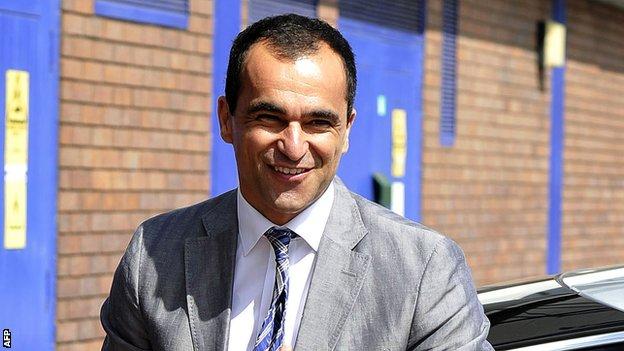 Under predecessor David Moyes, the Toffees finished in the top eight of the Premier League for seven seasons in a row between 2007 and 2013.

"We need to bring new signings, players who will develop that competition and give different options on the playing field," the 39-year-old told BBC Sport.

"We want to bring an extra dimension and competition for places."

Incoming Manchester United manager Moyes won widespread acclaim for consistently guiding Everton into the upper reaches of the Premier League on a limited budget, including reaching the qualifying stages of the Champions League in 2005, when they lost to eventual semi-finalists Villarreal.

On the back of another strong campaign in which the club ended up in sixth, players such as Belgium midfielder Marouane Fellaini and England left-back Leighton Baines have been linked with moves away from Goodison Park.

Martinez insisted he was "not worried" about any interest from other teams.

He said: "When you are successful, and Everton were clearly very successful last season, you will always get interest in players from other football clubs.

"It happens here, and in every football club in the land. We are not worried about that. We want the players to feel really appreciated.

"We need to invest and bring players in which will allow us to start this season with a stronger team than the one that ended the campaign."

On Wednesday, Everton chairman Bill Kenwright revealed for the group stages of the Champions League.

But the ex-Swansea boss said: "I am not saying it is a realistic target, it has to be the dream.

"We should be fighting to one day be in the Champions League spots.

"We cannot expect that to be a target straight away, that is not the league we are in."

Martinez's arrival on Merseyside ended his four-year stay in charge at Wigan.

During that time, he lifted the FA Cup last month but then requested to leave following the club's failure to avoid relegation to the Championship.

After battling against the drop throughout his time in charge at DW Stadium, there has been some scepticism among the Everton supporters about Martinez's appointment on a four-year contract. The Spaniard insisted he would be able to stop any negativity by creating a winning team.

He said: "The only thing I want is that every fan at Everton can be proud of what we are trying to do. I need to answer all the critics with work That is nothing different to what I have done in the past.

"It is healthy that there are people questioning the appointment. It keeps me desperate to show them what I can do and one day turn them around."