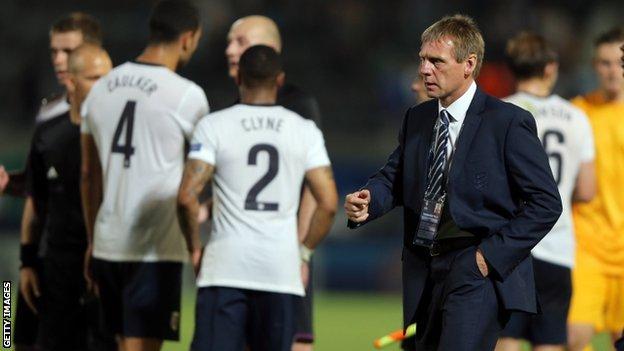 England opened their Under-21 European Championship campaign with a 1-0 defeat by Italy in Tel Aviv, Israel on Wednesday.

Coach Stuart Pearce's side held the Italians for 79 minutes until Lorenzo Insigne curled in a delightful free-kick past the despairing reach of goalkeeper Jack Butland.

England now face fellow Group A side Norway on Saturday knowing that a win is crucial if they want to progress in the Uefa competition.

BBC Radio 5 live summariser and former Tottenham manager David Pleat was in Tel Aviv to watch the opening fixture and gives his thoughts on the match.

What did you make of the performance?

"England were England, they defended and worked hard for each other but lacked inspiration. When they did have efforts at goal they were not too clever.

"We have to look at things in perspective - England were short of players. They were dogged and determined, but not creative enough. The Italians were clearly technically better.

"On the night Italy deserved the victory. They scored a fine goal. It was a brilliant effort from Insigne - Butland couldn't get there. It shaved the post as it went in - that's how accurate it was. England were perhaps denied a goal when Craig Dawson's header was disallowed, but Italy were denied two penalties.

"I was a little bit surprised by the Italians' celebrations - slightly over the top. But England lacked cleverness and incisiveness - and Insigne's goal was the deserved difference.

"I didn't expect England to beat Italy, but expected them to get a draw."

Which England players stood out?

"I thought Birmingham winger Nathan Redmond didn't do too badly. He was quite progressive with his runs down the right-hand side.

"The England group is probably not a fair representation of the best of Under-21 players in England. Some players have suspensions, some have injuries and some club managers have been reluctant to encourage their players to participate is the tournament.

"Some, like Phil Jones, Jack Rodwell and Alex Oxlade-Chamberlain, went to Brazil with the senior side. They probably would have been better employed pitting their wits and skills against the best Under-21 players in Europe.

"All these people who tweet and say what the problems are in the game, I'd like to see them stop being panellists and pundits and give coaching a go.

"Pearce knows his hands are tied. He is handicapped by the fact that he has very talented players who do not get the chance to play for the Under-21s."

How do England improve for Norway?

"Pure and simple - we need four points and we need to beat Norway. Norway fought hard to get a 2-2 draw against Israel in the opening match of the group on Wednesday.

"We are capable of beating Norway and Israel and are expected to beat them.

"Pearce will change the personnel. I expect he'll make three or four changes and will put out a better team against the Norwegians.

"If he has two strikers who he knows can play together then he will go for that. Marvin Sordell was on the left against Italy and looked like a fish out of water and Redmond was on the right.

"Fellow forward Connor Wickham, playing in the centre, probably didn't have enough to trouble defenders. Connor might have left Ipswich a little bit early. He has stuttered a little bit in his career at Sunderland.

"We were bereft of top-quality forwards and we need the likes of Raheem Sterling, Thomas Ince and Wilfried Zaha fit."