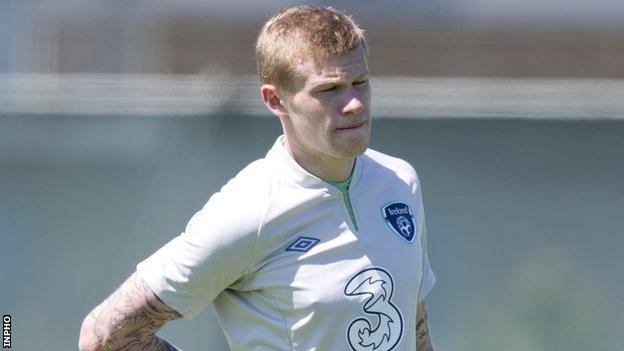 James McClean admits to feeling guilty for the trouble he has put Giovanni Trapattoni and Martin O'Neill through.

The Republic of Ireland winger had to apologise to his national team boss Trapattoni last September following a Twitter outburst.

His former Sunderland boss O'Neill also had to reprimand the Derry man on a couple of occasions.

"I feel a bit bad now because I haven't been the easiest," the Black Cats player said on Wednesday.

"Both Martin O'Neill and the manager (Trapattoni) have had a word in the past.

"But I take that on board and I think I have matured a bit in the last few months, and I will continue to hopefully do that."

I have learnt to not say too much

McClean was catapulted into the limelight when O'Neill handed him a debut as a substitute in his first game in charge at the Stadium of Light in December 2011.

The Derry native's impressive performance during the remainder of that season helped earn him a late call-up for Euro 2012.

However, McClean was given little opportunity at the Euro finals and his form for the Black Cats dipped last season.

McClean's decision to declare for the Republic as opposed to Northern Ireland had already generated some controversy.

A number of his Twitter postings allied to his decision not to wear a Remembrance Day poppy on his Sunderland shirt then also led to some negative headlines.

The Republic player insists that he has learned lessons from the "whirlwind" period.

"It will help me as a person. I will learn from all that and it will put me in good stead for the future.

"It was all new to me - I was still the same lad as I was from my time at Derry and that kind of went against me.

McClean appeared to be one of the Republic's better performances in the two World Cup qualifiers against Sweden and Austria in March but he may lose out to fit-again Aiden McGeady for Friday's vital clash against the Faroe Islands.

"It's been an indifferent season at club level for me," acknowledged McClean.

"Hopefully I am going to knock that behind me now and push on here with the Ireland squad."