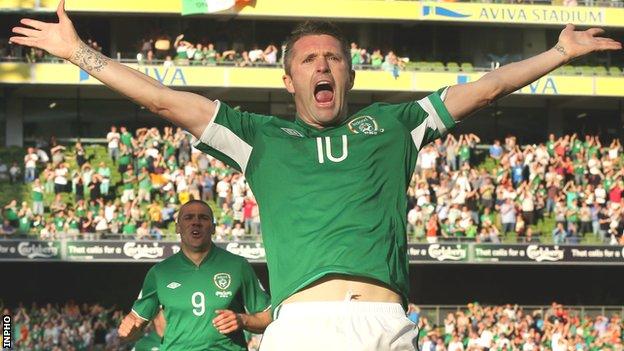 Robbie Keane marked his record 126th cap for the Republic of Ireland by hitting a hat-trick in the World Cup qualifying win over the Faroe Islands.

Keane, 32, fired in an early opener from Aiden McGeady's cross before he wasted a clear opening as the minnows frustrated the dominant hosts.

Seamus Coleman provided the cross for Keane to slot home the second goal 10 minutes into the second half.

Keane then netted from close range to complete a memorable treble in Dublin.

Robbie Keane is now the fifth-highest international goalscorer in European history with 59 goals.

It was a perfect start for the Republic and Keane, who passed Shay Given to become the country's most capped player.

McGeady sent in a low cross and the LA Galaxy striker neatly stroked the ball beyond keeper Gunnar Nielsen and into the bottom corner after just five minutes.

The Republic were stifled for the remainder of the first half as the visitors packed their defence in a simple gameplan of damage limitation.

Keane was guilty of poor finishing on 26 minutes, a well-worked free-kick putting the skipper clear on goal but he hesitated before a weak shot was saved by Nielsen.

Nielsen also tipped over a powerful volley from Keane and kept out efforts from Jonathan Walters and the impressive McGeady.

Wes Hoolahan, who was making his first start for the Republic at the age of 31, headed over from a McGeady cross three minutes after the restart.

The Norwich midfielder started the move for the first goal and he was again involved as the Irish doubled their lead after 55 minutes.

Hoolahan's pinpoint pass put Seamus Coleman through on the right and the full-back's first-time cross was slid in by the alert Keane.

The Faroes created a rare threat on goal when Atli Gregersen's header from a free-kick landed on the roof of the net.

Keane chalked up a 59th international goal as he completed his hat-trick on 80 minutes with a simple side-foot finish past Nielsen from substitute Conor Sammon's lay-off.

Simon Cox cut inside before blazing over as the Irish eased to victory, although they would have wanted a few more goals to boost their goal difference.

The Republic have moved up to third in the group after second-placed Austria beat Sweden 2-1.