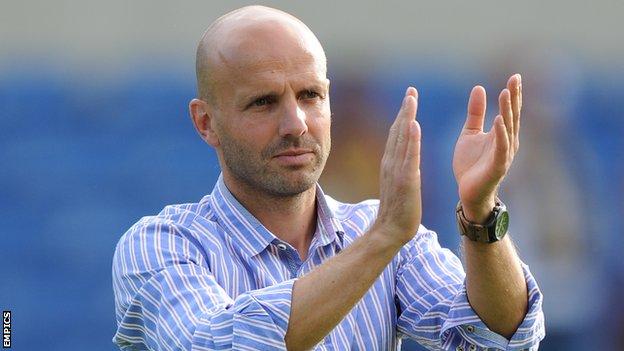 Exeter City manager Paul Tisdale says he will not rush into making any new signings this summer.

The Exeter boss, suggests it may be another month before any new blood comes in.

"We have to be very careful this summer and probably, if there are to be any signings, it won't be until just before, if not even, July," he said.

I'm hoping Matt will still be available for us and I'll talk to him then [at the end of June], but at the moment I can't commit to him so he's entitled to talk to anybody if he wishes

"That's not because we're failing on that, but we're not in a position to move forward and sign players.

"There are quite a few players that we've got that I'd like to sign if possible, but I'm not prepared at the moment, until I know how the land lies, to spend the budget."

The Grecians seem set to lose with reports linking him to a move to Cheltenham Town.

But Tisdale says the door is not closed on the possibility of fellow out-of-contract player Matt Oakley remaining with the club.

"We'll have to wait until the end of the month and see what the finances are like," Tisdale added.

"I'm hoping Matt will still be available for us and I'll talk to him then, but at the moment I can't commit to him so he's entitled to talk to anybody if he wishes.

"I can't stop it, I can't prevent it and if they wish to talk to someone else I wouldn't stop them either."