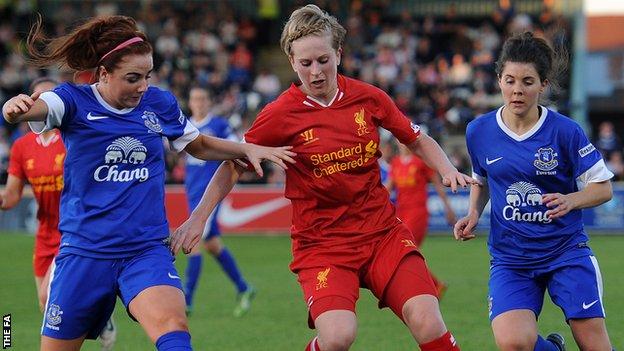 Ex-Everton striker Natasha Dowie was on target in a 4-1 Merseyside derby win that lifted Liverpool three points clear at the top of the Women's Super League.

Dowie took her season's goal tally to nine after strikes by Nicole Rolser, Louise Fors and Corina Schroder had taken the game away from the Toffees.

At the other end of the table Lincoln were held to a goalless draw by Doncaster Rovers Belles.

Liverpool had the upper hand from the early stages but all of their goalscoring efforts in the opening half-hour were off target.

German winger Rolser finally found the net when she latched on to the ball in a 32nd-minute goalmouth scramble to shoot home.

Everton drew level when, 10 minutes after the break, midfielder Jill Scott forced the ball in following a half-cleared corner.

But the Reds were back in front nine minutes later through a neat finish by Swedish midfielder Fors.

And another good Fors effort led to the third goal. Keeper Lizzy Durack blocked the Swede's 73rd-minute shot but German defender Schroder was there to turn in the rebound.

That was effectively game over, but Dowie sealed the victory when she ran clear to slide in the final goal two minutes from time.

Doncaster goalkeeper Nicola Hobbs had to make a string of saves as Lincoln looked to claim their first WSL win of the season.

The home side bossed the first half, but Donny almost snatched the lead when defender Ashleigh Mills's 25-yard drive forced Karen Bardsley into a fine save.

Hobbs was again the busier of the keepers after the break, although Lincoln did most of the attacking without creating too many chances.

The result left the Belles bottom of the table with no wins and only two points, with Lincoln just one place and one point above them.