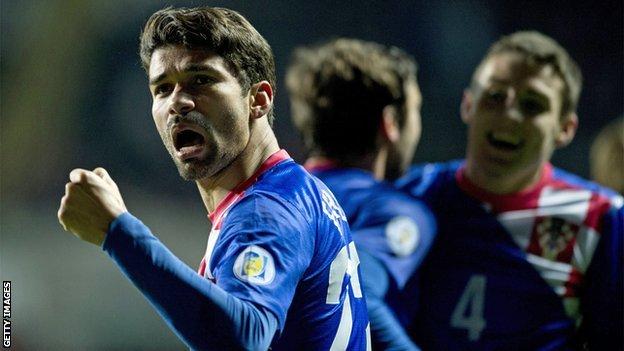 The build-up to Scotland's latest World Cup qualifier in a nightmarish campaign has been dominated by disparaging remarks from the Balkans.

"You will not cross the halfway line," warned one daily tabloid headline.

The quote allegedly came from Croatia coach Igor Stimac as he prepares his team with the intention of steam-rolling the depleted Scots in Zagreb.

It's also a sign that some in the international game now view Scotland as the group minnows - cannon fodder to be used to boost goal difference.

The bone-chilling fact for the Scotland players and supporters is that they are now faced with what is likely to be the toughest game in their group.

Croatia came out of the pot as top seeds in Group A, and are only being denied first place by the aforementioned goal difference, with Belgium ruling the roost.

There is a determination from the Croatians to claim first place - and the automatic qualification prize that comes with it - as the rock-bottom Scots head back to the former Yugoslavia less than three months after defeat in Serbia.

The good news - and there isn't much of it - is that it will be a Croatia shorn of suspended Real Madrid midfielder Luka Modric and his former Spurs team-mate, defender Vedran Corluka.

But even without them, this Croatia team is every bit as dangerous as the one in which Stimac and his predecessor, Slaven Bilic, made their names, even if the current incumbents lack the sparkle of the great 90s side.

The latter is a fair comparison because the ultimate Croatian legend, Boban, believes that 16-year-old Dinamo Zagreb midfield sensation Halilovic "could be as good as me".

Halilovic is already a target for some of Europe's top clubs and Stimac had no hesitation in bringing the teenager into his squad despite his age.

Mandzukic, meanwhile, is understandably a man with a spring in his step.

The 27-year-old became the first Croatian to score in a Champions League final when he netted Bayern Munich's first goal against Borussia Dortmund in this season's Wembley showpiece.

But no matter which strike-force Stimac opts for, Andy Webster and Grant Hanley could play together for the first time against a combination that has proved itself at international level.

Mandzukic has 11 goals for Croatia while Scottish football fans know exactly what former Rangers forward Nikica Jelavic - now at Everton - can do.

Shakhtar's former Arsenal striker, Eduardo, is the second-highest scorer in Croatia's history with 27 goals, behind only the great Suker, and the experienced Ivica Olic is a veteran of four international tournaments.

All four have scored at either a World Cup or European Championship finals.

Incredibly, goalkeeper Stipe Pletikosa - who had a trial at Celtic a year ago before moving to Rostov in Russia - played against Craig Brown's Scots in the goalless draw in 2000.

Aside from the suspensions, Stimac's team picks itself, with the forward line the one altered the most.

Ivan Strinic and Darijo Srna are the trusted full-backs, with the latter one of the finest crossers of the ball in world football.

No Modric might result in another Spurs old boy, Niko Kranjcar, returning in midfield, with Brazil-born Sammir pushing for a start out wide.

The differing fortunes of the respective nations since Scotland qualified for the 1998 World Cup are stark.

Since then, Croatia have been at five of the seven major international tournaments to Scotland's zero.

And, despite a population of just 4.25m, they are currently ranked fourth in the world behind only Spain, Germany and Argentina, while Scotland sit in a lowly 78th, just 10 above their worst-ever placing.

Two points from the remaining four games are required if Scotland are to avoid slipping into pot five for the Euro 2016 qualifiers.

Not many, including the opposition boss it seems, believe they'll get them here.