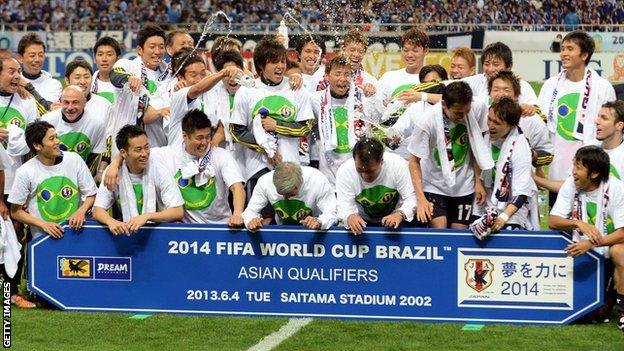 Japan have become the first team to qualify for the 2014 World Cup and join hosts Brazil in football's showpiece tournament next summer.

Keisuke Honda scored an injury-time penalty in a 1-1 draw against Australia to secure Japan's place at the finals for a fifth successive time.

Japan have an unassailable seven-point lead in their Asian qualifying group.

Manager Alberto Zaccheroni said: "Just qualifying is not enough. We will aim even higher in Brazil."

The Italian added: "I came to bring them to the World Cup - that was my bottom line. I feel relieved that I achieved it.

"We have a very strong commitment to playing well. We are going to improve further and surprise the world."

Australia, who had taken the lead against Japan through Tommy Oar, are third in the group and battling with Jordan, Oman and Iraq for the second automatic qualifying spot.

The third-placed team will go into a play-off against the team in third in the other group, with the winner of that to face the fifth-placed South American team for a place at the World Cup.