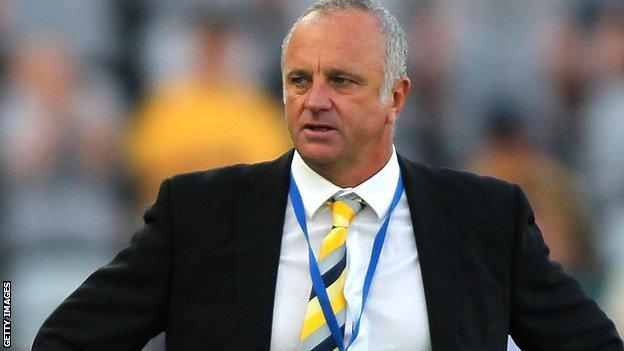 The 49-year-old said United were "prehistoric" after having talks about their managerial vacancy.

The Blades have been managerless since Danny Wilson's departure in April.

"I think his comments are misplaced. There's far more to this club than he'd have you believe," Winter told BBC Radio Sheffield.

Arnold, who has previously managed the Australian national side, guided Central Coast Mariners to their first A-League title last season.

"He's obviously chosen to ignore elements of what we did in the interview," said Winter.

"The club is looking to modernise its football structure. We're introducing a head of football operations and we've got an emphasis on recruitment, academy and administration.

"We want a manager to pick up the reins in terms of the culture and introduce a particular way of playing.

"We want someone with a clear football philosophy that encourages talented players to express themselves and bring about success on the field.

"We set out a detailed job description for the role and Graham had that so it is interesting that his comments came about really."

Meanwhile, Winter has asked fans to be patient while they continue their search for the man to take over at Bramall Lane.

Motherwell boss Stuart McCall decided to remain with the Scottish side after talks, while Port Vale coach Robert Page and former Portsmouth, Blackpool and Blackburn boss Michael Appleton have also been strongly linked with the post.

"It's been quite frustrating in a way that co-ordinating candidates has been so difficult. We need to take our time and get this right," he said.

"We don't want to rush into anything. There's a little bit more patience required but we're nearly there and hopefully we'll announce a new manager fairly soon."