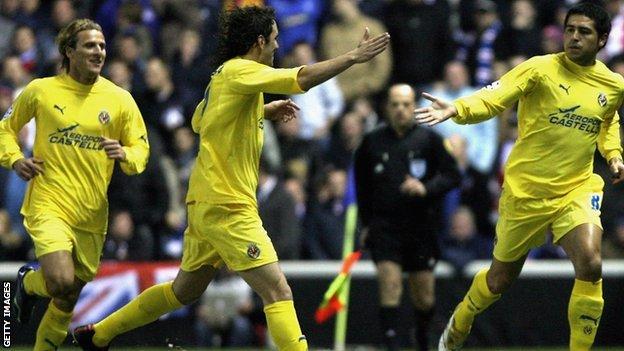 In Villarreal's Bar El Madrigal, across the street from the club's stadium of the same name, there is a sea of scarves pinned on the wall behind the counter.

Each commemorates a great Champions League night of the past, against visitors such as Manchester United, Manchester City, Arsenal and Napoli.

This weekend, a match arguably as important as any of those will take place in the stadium as Villarreal welcome Almeria, with automatic promotion to La Liga at stake. A win or a draw would confirm the hosts' return to the big time, but an away victory would send Almeria up at their expense - and condemn Villarreal to the play-offs.

If England's football-supporting public had forgotten about Villarreal - which hardly seems likely given the drama of their 2006 Champions League semi-final against Arsenal - then they are set to be reminded.

The expected arrival of Manuel Pellegrini at Manchester City will recall the years when the Chilean coach made the team known as the Yellow Submarine a fixture in European club competition. Santi Cazorla, perhaps Villarreal's last truly world-class performer, has just enjoyed a productive debut season at Arsenal.

Cazorla's 2011 exit from El Madrigal was a pointer towards a change in Spain's second strata below Real Madrid and Barcelona. The midfielder went on to help his new club, big-spending Malaga, qualify for the Champions League for the first time.

Meanwhile, Villarreal endured a season of misery. Forced to sell Cazorla to their rivals for a top-four place for financial reasons, they then saw one of their other key assets, Italy's Giuseppe Rossi, suffer a serious knee injury.

The side from the Costa Azahar lost all six of their Champions League group games - against Manchester City, Bayern Munich and Napoli - and were relegated from La Liga on the season's final day.

It was a far cry from the years of achievement under Pellegrini.

Arriving in 2004, the coach signed the likes of Manchester United striker Diego Forlan and immediately led Villarreal to third spot and Champions League qualification. After squeezing past Everton in the play-off round, they went on to enjoy a stellar season in Europe.

Pellegrini's side advanced from the group stage at the expense of Manchester United, and eliminated Rangers and Inter Milan on away goals before facing Arsenal in the last four. After losing 1-0 at Highbury in the first leg, only Jens Lehmann's late penalty save from Juan Roman Riquelme prevented Villarreal taking the Gunners to extra time in the return.

Survivors from the Pellegrini era

Javi Venta: Right-back, rejoined the club from Levante in 2012

Those days of plenty at El Madrigal may be gone - current coach Marcelino Garcia Toral said after a recent win over Racing Santander that "we don't have Riquelme or Forlan any more".

But, though the budget may be smaller after relegation and some business losses suffered by president Fernando Roig in recent years, Marcelino has engineered a sharp upturn in fortunes since his arrival in January.

The campaign to come straight back up had suffered a tragic start, as new coach Manuel Preciado died from a heart attack on the very same day in June 2012 that he was appointed to spearhead their promotion challenge.

His successor, former B team coach Julio Velazquez, was sacked in January after a 1-1 draw in their first game against Almeria, in which former Aston Villa defender Olof Mellberg scored Villarreal's equaliser.

The team were languishing in seventh place then, a far cry from the coveted second spot they occupy going into this weekend's showdown. Villarreal have battled their way there despite a lengthy injury list and a taxing run-in that has seen them play all of their promotion rivals in a thrilling last month.

Midfielder Cani, a veteran of the Pellegrini days, said after Sunday's 3-0 win at Barcelona B that the team's spirit has helped "to overcome whatever difficulty, mistake or blow that's happened to us, whether it's been injuries, suspensions, or opposition goals".

The 31-year-old also highlighted the contribution made by the team's supporters. Not renowned for a huge following, Villarreal took an astonishing 10,000 fans to the Mini Estadi for Sunday's game.

The players emerged into the sunshine to be greeted by a huge banner daubed with the legend "Bienvenidos al Madrigal" (Welcome to El Madrigal). "One of the key things has been the support from the stands," said Cani. "The support from our fans has been 10 out of 10 and they give us a lot of confidence."

Even when in the top flight, Villarreal often struggled to fill their 25,000-capacity stadium, but on Monday, the remaining 9,000 tickets for the Almeria game were sold in under six hours to personal callers. El Madrigal will be full for the first time this season.

If Marcelino's men do seal the deal, there will be no Monaco-style spending spree to celebrate. Consolidation will most definitely be key, with 2000 champions Deportivo La Coruna's relegation last Saturday after one season a warning of how winning promotion is the easy part. Yet for now, many would just be pleased to see them back.