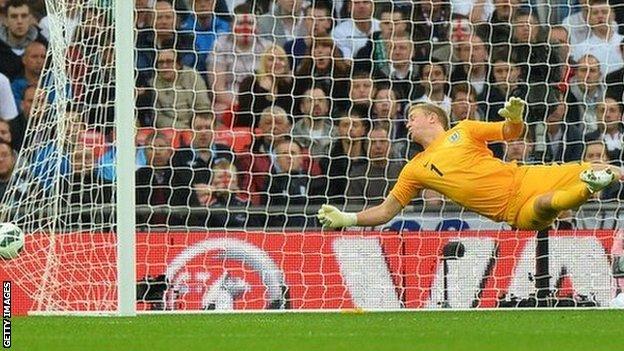 Joe Hart says England's critics can "tweet all they want from their sofas" while Roy Hodgson's side concentrate on qualifying for the 2014 World Cup.

Former England striker Gary Lineker used social media to describe Hodgson's tactics during the 1-1 draw against Republic of Ireland last week as "a step back to the dark ages".

"They can tweet all they want from their sofas - we're out here doing it."

Lineker was upset that Hodgson opted for a rigid 4-4-2 system against Ireland.

"Don't like England playing this system," added Lineker. "So easy to play against. Predictable and dated."

England followed up their lacklustre midweek performance with a 2-2 draw against Brazil in the Maracana on Sunday.

Hodgson's side have won just three of the last nine matches, including two against San Marino, and sit second in their World Cup 2014 qualifying group with four games to go, two points behind Montenegro.

Three of England's remaining four World Cup qualifiers are at Wembley. They entertain Moldova on 6 September before travelling to Ukraine four days later.

England then entertain Group H leaders Montenegro on 11 October and round off their qualifying campaign at home to Poland on 15 October.

"I would love to be back in Brazil next year but we have a long hard road ahead of us and we will put everything we can into it," added Hart after winning his 32nd cap against Brazil.

"We have to take the positives though. We beat Spain and Brazil at home in friendlies.

"No one has taken us apart - we just need to get over the finish line [in qualifying].

"We dug in when we needed to and we have to repeat that [in September]."