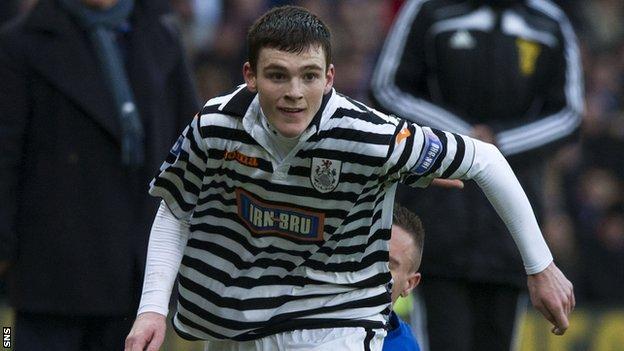 Defender Robertson, 19, and midfielder Connolly, 17, have both signed two-year contracts with the Scottish Premier League club.

And manager Jackie McNamara expects them to feature next term despite only one season of senior football each.

"I will look for both to make an impact as soon as they come in," he said.

"My desire is to improve Dundee United and I see these young players as two assets who will do that.

"They know that at Tannadice there is the opportunity to get involved at first-team level should they promote themselves correctly.

"I believe that both have an exceptional chance of becoming important players for Dundee United."

Connolly follows in the footsteps of his midfielder father, Paddy, who started his career at Tannadice before playing for Airdrieonians, St Johnstone, Morton, Ayr United, Stirling Albion, Brechin city and Albion Rovers and who is presently assistant manager with Alloa Athletic.

The teenager made a swift impact at Hampden, making 25 appearances and scoring six goals since breaking into the team in November.

Robertson made 40 appearances in his first season in the first team and had also attracted the interest of St Johnstone and McNamara's former club, promoted Partick Thistle.

Queen's Park, who missed out on promotion to Division Two after losing to Peterhead, had voiced fears of missing out again on compensation for the duo should they head for Hampden.