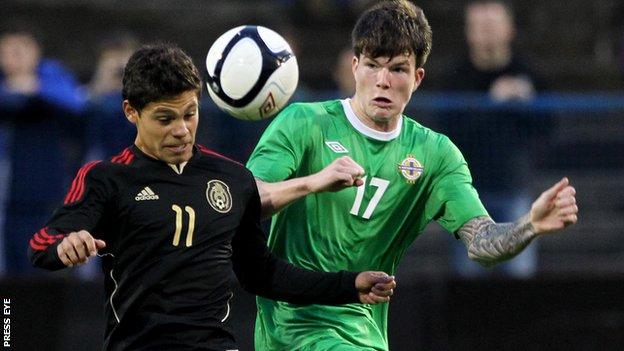 Michael O'Neill says he is surprised Wolves striker Liam McAlinden has opted to switch allegiances from Northern Ireland to the Republic of Ireland.

McAlinden has represented Northern Ireland for four years at youth level and was expected to be part of the Under-21 squad for the 2015 European qualifying campaign.

He has informed the IFA of his decision to opt for the Republic of Ireland.

"It was one which came as a little bit of a surprise to us," admitted O'Neill.

"He has a good relationship with Stephen Robinson, our Under-21 coach," O'Neill told BBC Radio Ulster.

"I met Liam personally on a couple of occasions and we met with him hoping that might persuade him to stay with Northern Ireland, but he has decided to stick by his decision.

"I think for family reasons he maybe felt a greater sway to play for the Republic of Ireland. He mentioned that when we did have a meeting with him."

O'Neill indicated that the 19-year-old would have had a better opportunity to play senior international football with Northern Ireland than he will with Giovanni Trapattoni's Republic squad.

"I believe he would certainly have a greater chance to play for us at senior level in the near future than he will do with the Republic of Ireland, but ultimately the decision lies with the player.

"He could have turned around and (declared) for England as well, so unfortunately it's something we have to live with."

Meanwhile, Middlesbrough midfielder Jordan Jones and Swansea forward Rory Donnelly do not wish to be considered for selection for Northern Ireland.

The trio had been named in the Under-21 squad to play Cyprus in a European championship qualifier on Thursday night.