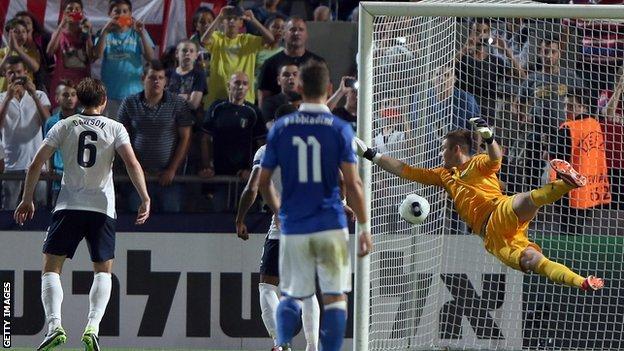 Italy's Lorenzo Insigne struck a 79th-minute winner as England made a disappointing start to their European Championship campaign in Tel Aviv.

The Napoli winger floated in a 20-yard free-kick to beat Jack Butland.

England's Craig Dawson had scrambled the ball over the line in the 48th minute but the goal was disallowed for a Steven Caulker push in the build-up.

Jordan Henderson almost snatched an injury-time equaliser but his free-kick was saved by Francesco Bardi.

It was the only time the Italian keeper was forced to make a save as England struggled to cope with the dominant Italians.

England had won their last nine games without conceding a goal but rarely looked like extending their record as they were pinned back for much of the game.

They struggled to contain dangerman Insigne, whose late goal was the first conceded by Stuart Pearce's side in 899 minutes, stretching back to November 2011.

Insigne always looked the most dangerous threat and fired an early warning with a low shot drilled past Butland's near post.

The winger then carved out another opportunity when he exchanged passes with Genoa's Ciro Immobile but lifted his shot over the bar with Butland diving at his feet.

Insigne's winner finally came 10 minutes from the end when his delicious curler beat Butland at his near post after Nathaniel Clyne had caught Italy substitute Manolo Gabbiandini on the edge of the box.

It seemed as though referee Antony Gautier had initially pointed to the penalty spot before changing his mind and it was not the only time the French official caused confusion.

Most noticeably he disallowed Dawson's 48th-minute header after the stadium scoreboard and announcer had awarded the goal to England.

England were England, they defended and worked hard for each other but lacked inspiration. They were short of two or three players, but when they did have efforts at goal they were not too clever.

Dawson's central defensive partner Caulker was adjudged to have pushed Inter Milan defender Luca Caldirola as he hooked the ball back for the West Brom defender to head it over the line.

The referee had already frustrated the Italian players when he waved away penalty appeals after defender Jack Robinson appeared to catch midfielder Alessandro Florenzi midway through the first half.

England can take solace that Italy are regarded as their strongest opponents in the group and will hope to have key players back to face Norway and hosts Israel, who drew their opening game 2-2 earlier on Wednesday evening.

Pearce was without Wilfried Zaha and Henri Lansbury, who were both suffering from niggling injuries, while Thomas Ince and Danny Rose were serving controversial suspensions following incidents after last October's win in Serbia.

The England coach handed an Under-21 debut to Nathan Redmond and the Birmingham winger was England's liveliest attacker.

He created England's best opportunity of a flat first half when he wriggled past two challenges but blasted high over the bar.