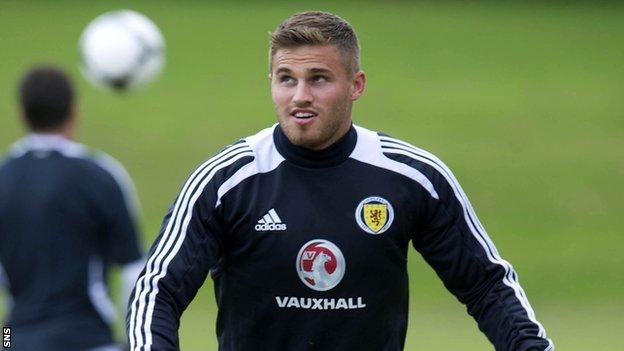 Dundee United manager Jackie McNamara has confirmed that he is interested in bringing Blackburn Rovers striker David Goodwillie back to Tannadice on loan.

But McNamara admits he faces competition from several other clubs.

Aberdeen, Hearts and Blackburn's rivals in the Championship are also thought to be interested in the 24-year-old, who left United for Rovers in 2011.

"We've spoken to Blackburn about his availability and getting him back on loan," McNamara told STV.

"We'd love to have him back. Whether or not it's possible, we'll have to wait and see.

"I think there's a few clubs after him, but I think it certainly would be one we'd be interested in."

Goodwillie has struggled to make an impact in English football, making only 10 starts for Blackburn since his £2.8m move to Ewood Park.

Despite their relegation from the Premier League, he made only 10 appearances last season for Blackburn and one more as a substitute during an ill-fated .

Goodwillie has also fallen out of the international picture and was left out of the squad for this week's World Cup qualifier against Croatia despite manager Gordon Strachan being faced with several injury call-offs.

However, in his final season in the Scottish Premier League, the product of the Tannadice youth system fired 19 goals and McNamara could view him as an ideal replacement for the player who effectively took over his scoring role with United.

Chairman Stephen Thompson has made public the likelihood that Johnny Russell will be sold this summer as the former Scotland Under-21 international heads into the final year of his contract.

and Catania have already been rejected, but McNamara dismissed reports that there had been any offer from Celtic.

"It has to be right not just for the club but for Johnny financially," the manager said when asked what would constitute an acceptable offer.

United have already as a replacement for .