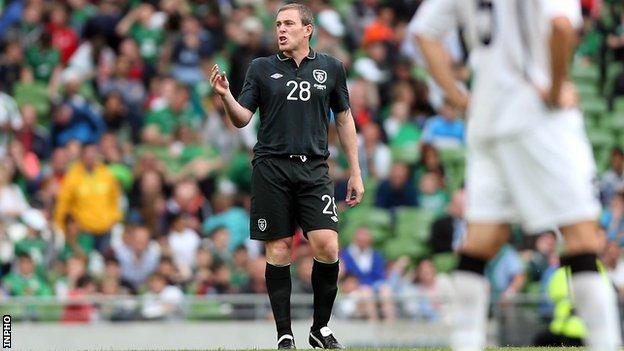 Giovanni Trapattoni has said that Richard Dunne and Wes Hoolahan are both "90%" certain to start the Republic of Ireland's World Cup qualifier against the Faroe Islands.

Both men put themselves in contention to start on Friday night after impressing in the 4-0 win over Georgia.

Dunne, 33, came on as a sub in Sunday's friendly for his first game in a year.

Asked if the centre-half will start in the Aviva Stadium, Trapattoni said: "He will be 90% on the pitch."

Dunne, who has revealed he is leaving Aston Villa this summer, has not played since Ireland's defeat by Italy at Euro 2012 because of a persistent groin problem.

We link up very, very well

Norwich playmaker Hoolahan turned in an impressive display against Georgia in his first start for Ireland and, with James McCarthy and Shane Long both suspended on Friday, he too seems likely to be rewarded with a starting role.

Trapattoni said: "Ninety per cent yes; we have no training today but after training tomorrow we can put things a little bit more in place.

"We know Wes. It was important to see him in midfield with McCarthy.

"It was important physically to contain this situation because at his club, he plays as the second striker and he has more support.

"But he played well. He ran a lot and he was clear also in the pass because he gave two or three very important passes, and we have trust about him also in the future."

Robbie Keane, who came off the bench to score two goals in his 125th international appearance, has backed Hoolahan's claims for a start against the Faroes.

"You know what he can do. He likes to get the ball and play it around the corner which suits me perfect because I'm always in the hole waiting," said Keane.

Keane's place in the Republic line-up on Friday looks assured after bringing up his international goals haul to 56 in Sunday's game.

Trapattoni believes the Dubliner, 32, has been rejuvenated by his move to LA Galaxy and says Keane will remain a key member of his squad.

"In America, he has gained fresh enthusiasm in a new situation and he looks very, very well," said the Republic boss.

"Before the game, he was very, very sharp."