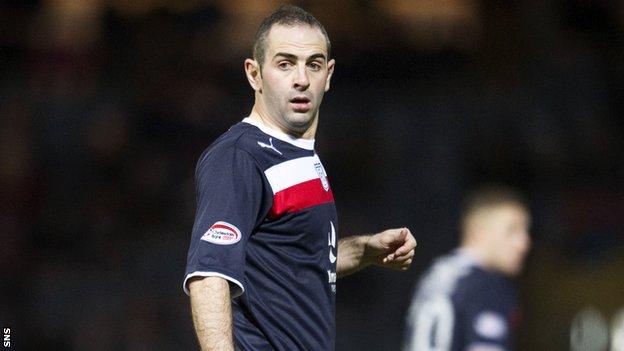 St Mirren have signed Dundee midfielder Gary Harkins on a two-year contract after he decided to leave Dundee.

Harkins exercised his right to cancel his deal with the Tayside outfit after they were relegated from the Scottish Premier League.

His new deal ties him to the Paisley club until the summer of 2015 with an option for a further 12 months.

The move is a significant boost for Saints boss Danny Lennon as he attempts to rebuild his squad for next season.

After winning the Scottish Communities League Cup in March, Danny Lennon's side suffered a miserable run of form in the top-flight, eventually finishing in 11th place.

Harkins adds to the , who has agreed a one-year deal to remain with the Buddies.

Lennon told the club's official website: "I am delighted that we have the signatures today of Paul McGowan and Gary Harkins.

"We have a clear vision of what we want to achieve and how we want to achieve it this season and these two players are key to those plans as they are both outstanding, quality footballers who are thrilling to watch and can influence games.

"We have other players we want to bring in to complement them and we want to see some of their qualities rubbing off on the young players we are developing here.

"We are pulling together an exciting squad for the coming season and I am already itching to get back on the training ground with them."

Harkins had previously suggested the uncertainty over ownership of Dundee could lead to him leaving.

Three members of Dundee's six-man board resigned last month amid disagreement over a proposed £1.5m investment by a consortium from Texas.

McGinn rejected the offer of a new contract to , to whom he ended the season on loan.

The Scotland Under-21 international had arrived in Paisley after leaving Rangers last summer, but the 22-year-old failed to make a single appearance for the Buddies and was sent on loan to Division One side Airdrie United.