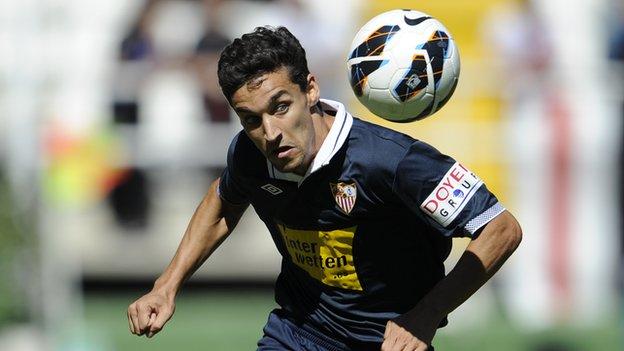 Manchester City's prospective new signing Jesus Navas has spoken of his delight at the move, saying it was decided "some time ago".

City have agreed a fee with Sevilla of around £17m plus add-ons for the Spain international winger.

Navas, 27, has spent his entire career at his hometown club but said of the switch to England: "It's a good project and it was the moment to make the step.

"It was my choice. I'm very happy with the decision."

He added: "We've been talking with Manchester City for four months. The Premier League is a competition where the football is very fast. I'm really looking forward to it. Manchester City are making a great team.

Navas has suffered from chronic homesickness in the past and spent his entire career at Sevilla, which is 20 miles north of his hometown of Los Palacios y Villafranca.

He turned down a move to Chelsea after helping Sevilla beat Middlesbrough in the 2006 Uefa Cup final, citing a fear of living abroad.

Navas has suffered from anxiety attacks when away from home for extended periods and has been forced to leave training camps on several occasions.

The good news for Manchester City fans is that extensive counselling appears to have alleviated the problem.

"I'm going from Sevilla, which is a very nice place, and I'm going to a great club in England. I wanted to continue growing there and they've put a lot of faith in me and I want to continue doing well there."

Navas, who has more than 20 caps for Spain, would be City's first major signing of the summer as they look to regain the Premier League title from neighbours Manchester United.

He was a key part of the Sevilla team that won the Uefa Cup in 2006 and 2007 but was held back earlier in his career by a fear of travelling away from his Andalusian home.

A quick and direct right winger, he was a member of Spain's successful 2010 World Cup and Euro 2012 squads and is in the 23-man party picked for the eight-nation Confederations Cup, which starts on 15 June.

He has, however, been criticised for his lack of goals and failed to find the net in 37 league appearances last term. In total, he only scored 23 goals in 285 league games for Sevilla.

City are yet to appoint a successor to Roberto Mancini as manager, with Manuel Pellegrini expected to move to the club from Malaga.

"Sevilla accepted an offer from the English club on Monday, taking into account the desire of the player, who will now have to pass a medical.

"Navas wants to continue his successful sporting career in English football, more precisely at a club at which he can continue to develop as a footballer, as he has publicly stated on various occasions in recent months."