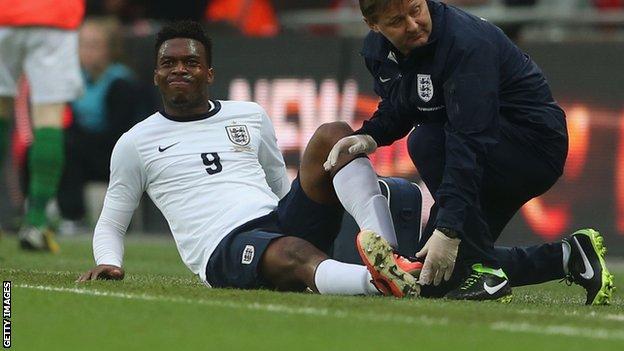 Liverpool have moved to allay fears over Daniel Sturridge's ankle injury by stating they hope the striker will be available for the start of the season.

Sturridge, 23, damaged ligaments during England's 1-1 friendly draw with the Republic of Ireland on 29 May.

Reports suggested the former Chelsea man could be out for up to four months.

But a statement from the club said: "Liverpool hope to have Daniel Sturridge available for the beginning of the 2013-14 campaign."

The statement is not only good news for Liverpool manager Brendan Rodgers, but England too.

Daniel Sturridge became the first Liverpool player for almost 40 years to score in each of his first three appearances for the club, finding the net against Mansfield, Manchester United and Norwich in January.

A four-month lay-off would have ruled him out of England's World Cup qualifiers against Moldova, on September 6, and Ukraine four days later.

"Sturridge's ankle injury has been reviewed by a specialist," added the Liverpool statement.

"He suffered a high ankle sprain and Liverpool's medical staff had to allow the swelling to reduce before a final assessment was made."

Sturridge has scored 10 goals in 14 Premier League appearances since moving to Liverpool from Chelsea in January for £12m, including a hat-trick against Fulham on 12 May.

He has six England caps, with his only goal coming in a World Cup qualifier against San Marino on 22 March.

Liverpool ended last season without several players due to injury.

Captain Steven Gerrard missed the end of the 2012-13 campaign to undergo a shoulder operation, but the 33-year-old midfielder hopes to be fit for the start of next season.

Winger Raheem Sterling, 18, is also hoping to be ready after a thigh problem.

Defender Daniel Agger, 28, missed the last two games of the season with an ongoing back injury, while midfielder Joe Allen, 23, has undergone a shoulder operation.