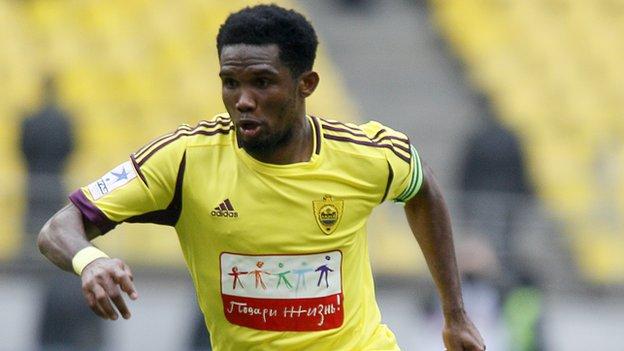 Cameroon skipper Samuel Eto'o will miss Sunday's World Cup qualifier against Togo because of injury but may be fit to face DR Congo a week later.

Cameroon coach Volker Finke said: "Eto'o... has been recommended by his club to rest for a few weeks. So he will likely miss the match in Lome.

"But I'm sure he will be present for the match after that against DR Congo on 16 June in Kinshasa."

He has recommended that the striker should be allowed to rest and Anzhi also offered to treat Eto'o back in Europe if Fecafoot are happy with the arrangement.

However, Eto'o flew to Cameroon on Monday so that the Indomitable Lions' medical team could examine the injury.

And Finke seems optimistic that Eto'o will be fit to help the Group I leaders - they have six points, one ahead of Libya, while DR Congo have four and Togo just a single point so far.

Eto'o played the full 120 minutes as his side lost on penalties to CSKA Moscow in the Russian Cup final.

His club commitments also meant he missed Cameroon's goalless draw in Kiev against Ukraine, in what was Volker Finke's first match in charge of the Indomitable Lions.