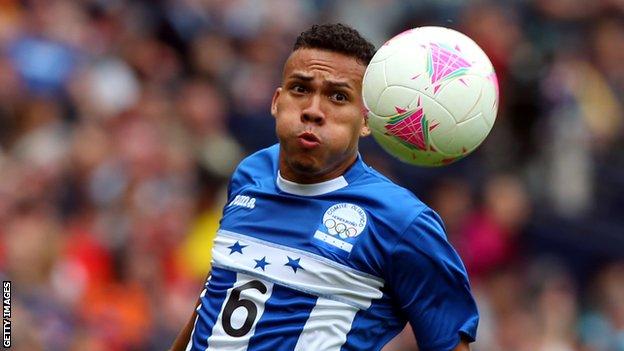 The 24-year-old midfielder's move to the Third Division champions is subject to receiving a work permit.

"I am delighted to be joining a club of the size and history of Rangers," he told the club's official website.

Rangers boss Ally McCoist said his latest recruit would add "a bit of bite" to his midfield next season.

A transfer embargo means Peralta can join the rest of the squad for pre-season training but will be registered on 1 September.

Previously with Vida in the Honduran national league, Peralta has earned 13 caps and been on loan with MLS side Real Salt Lake.

Arnold is very aggressive and he gets about the park well, so I think he would blend in with the rest of the midfield and he will be a good signing

"We're delighted Arnold has agreed to join us," said McCoist. "We went over and watched him playing for Honduras against Panama and he performed well.

"He will certainly give us a bit of bite in the middle of the park. He actually played at right-back when we saw him but his best role is sitting in midfield.

"Arnold is very aggressive and he gets about the park well, so I think he would blend in with the rest of the midfield and he will be a good signing.

"It's great we are signing a Honduran international who is of a good pedigree and playing in World Cup qualifiers."

Peralta says he had been approached by clubs in his homeland and the USA, but had no hesitation in making the switch to Glasgow.

"I had several offers from Europe, MLS and at home in Honduras," said Peralta. "But when I was told I could sign for Rangers it was an easy decision.

"I am really looking forward to pulling on that famous blue shirt and getting out on the Ibrox pitch.

"Hopefully the club and fans will appreciate what I can bring to the team."