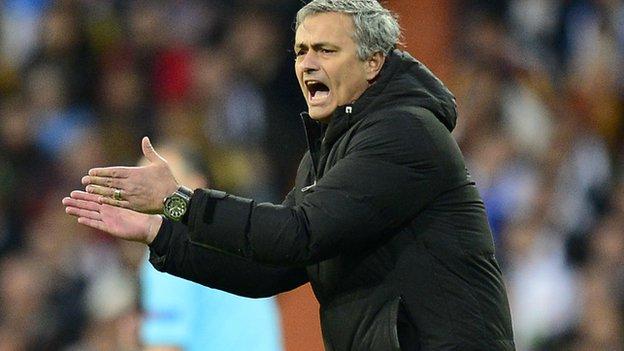 Jose Mourinho has said on Spanish television that he expects to be reappointed as Chelsea manager by the end of the week.

The 50-year-old has left Real Madrid after three years in charge.

He told football programme Punto Pelota: "I will go to London and between Monday and the end of the week I will be the new coach of Chelsea."

He also clinched the FA Cup and two League Cups before leaving in September 2007.

Mourinho added: "I hope to be Chelsea's new coach.

"I would like to be it because I was happy in London and I feel that the people there love me.

"Life is beautiful and short, and in life you have to seek out what you think is best for you."

Real Madrid announced in May that the Portuguese would be leaving the club. Defeat by Atletico Madrid in the Copa del Rey final ensured Mourinho ended the season without a trophy.

Madrid also finished runners-up to Barcelona in the league and suffered a third successive semi-final exit in the Champions League.

Mourinho hinted after Real's last-four defeat to Borussia Dortmund that he was looking to return to England and Chelsea.

On Sunday, the Premier League apologised to Chelsea after publishing a story on its website saying Mourinho had returned as manager of the Blues.