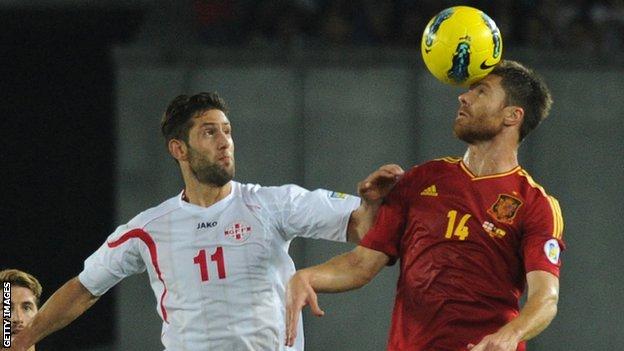 Former Liverpool midfielder Xabi Alonso is out of Spain's Confederations Cup squad because of a groin injury.

The Real Madrid player is one of three names cut from the provisional 26-man squad, with fellow midfielders Javi Garcia of Manchester City and Benat Etxebarria of Real Betis also released.

But after 23 goals for the Stamford Bridge club this season, Del Bosque said it was now time for Torres, who has scored 31 goals in 101 appearances for the Spain national side, to return to the fold for the world and European champions.

"When Torres and [Bayern Munich midfielder] Javi Martinez didn't come in before, it was because we didn't think the moment was right. Now it is the opposite - they are both in good form," said Del Bosque.

Spain will travel to the United States for friendlies against Haiti in Miami on Saturday and the Republic of Ireland in New York a week on Tuesday before heading south to Brazil.

Del Bosque's men will play in Group B at the Confederations Cup along with Tahiti, Uruguay and Nigeria.

The tournament takes place every four years and features the reigning champions of the six confederations that make up Fifa, with Spain travelling as representatives of European governing body Uefa.

The final two places are taken by the World Cup holders, plus the next hosts, although with Spain the reigning world and European champions, Euro 2012 runners-up Italy have been invited as the eighth team.