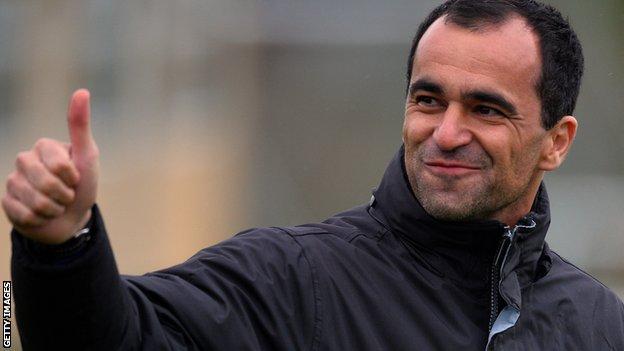 Everton have appointed Wigan Athletic boss Roberto Martinez as their new manager on a four-year contract.

The 39-year-old Spaniard won the FA Cup at Wigan this season, but asked to leave the DW Stadium after failing to keep them in the Premier League.

He succeeds David Moyes, who takes over from Sir Alex Ferguson at Manchester United after 11 years at Goodison Park.

Martinez will be officially presented as Everton manager at a news conference at 16:00 BST.

Wigan said in a statement: "Roberto's influence at the club, both as a player and manager, an association that spanned over a decade, will remain unforgettable to all Latics' fans.

"The club would like to place on record its appreciation for his tireless work during that time, culminating in FA Cup glory last month at Wembley Stadium."

Martinez made 180 appearances as a player for Wigan between 1995 and 2001 before returning as manager eight years later.

Under him, Wigan finished 16th twice and in 15th place before slipping to relegation this season.

In June 2011, he was a target for Aston Villa but opted to stay at the DW Stadium. He was also strongly linked with the Liverpool job last summer.

Martinez, who was hired by Wigan after taking Swansea City from League One to the Championship, announced last month that he would leave the Latics after four years at the helm.

Whelan said on Monday that he had agreed a deal with his Everton counterpart Bill Kenwright to allow the under-contract Martinez to leave.

The Spaniard takes charge of an Everton team which recently finished sixth in the Premier League.

The Toffees have secured a top-eight finish in each of their last seven campaigns.

Former Everton winger Pat Nevin told BBC Radio 5 live that Martinez will be judged a success at Goodison Park if he can maintain the club's current position.

"Bill Kenwright was determined to be painstaking and detailed about his search for David Moyes' successor but he may also have had a gut instinct about Roberto Martinez and Everton being a perfect fit.

"He will hope, as he did so emphatically with Moyes, that he has made the right choice."

He said: "The realism is, if he does as well as Moyes, he would have done a brilliant job. Moyes has maximised the potential of that club.

"Can he do better than that with their finances? He must roughly finish fifth or sixth, which isn't easy, and he will want to do it in a special way.

"Everton like a cultured game of football, so he will be welcomed. He does have one thing on his CV which Moyes hasn't got though, and [that] is a trophy."

With Martinez's exit from Wigan confirmed, Whelan told BBC Radio Jersey that he will begin speaking to candidates to succeed the Spaniard shortly.

"Obviously, I am now free to look and interview managers because I have to fill the vacancy," he said. "I am in Jersey now for four days, and when I get back, I have to get that vacancy filled within one week.

"I have had over 30 applications from some great men. I am excited about interviewing them.