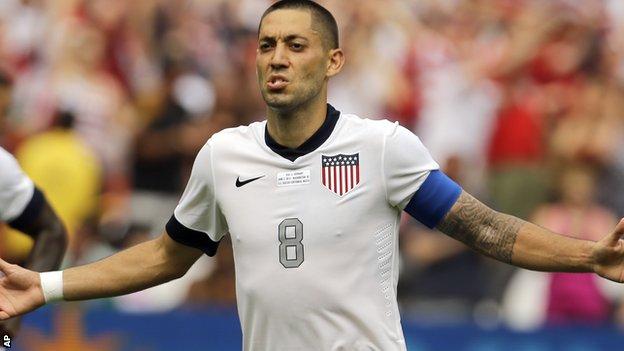 Jozy Altidore opened the scoring for the hosts, who doubled their lead through Benedikt Howedes's own goal.

Gerd Mueller's 39-year-old record as Germany's top goalscorer remains intact after Miroslav Klose failed to score against the US. But with 67 goals in 127 appearances, Klose is just one goal short of matching the German legend

Heiko Westermann pulled a goal back, but Dempsey's brace made it 4-1.

Max Kruse and Julian Draxler ensured a tense finish, but the US held on to give their coach Jurgen Klinsmann victory over his homeland.

It was a morale-boosting victory for the home side in the US Soccer Federation's centennial celebration match, just four days after they struggled in a 4-2 loss to Belgium.

However, Germany were missing players from Bayern Munich, who completed the treble on Saturday with victory in the German Cup final, and Borussia Dortmund. Only Dortmund's Sven Bender played in the all-German Champions League final and against the United States.

Dempsey's brace means he moves to 35 international goals in 96 appearances, taking him past Eric Wynalda into second on the all-time US scoring list - 14 shy of Landon Donovan's record.

"Having a player like Clint Dempsey on your team is just a privilege," said Klinsmann. "This is one of the best players in US history. He has the hunger and the drive. He sends a message to his own players and also to the opponents."