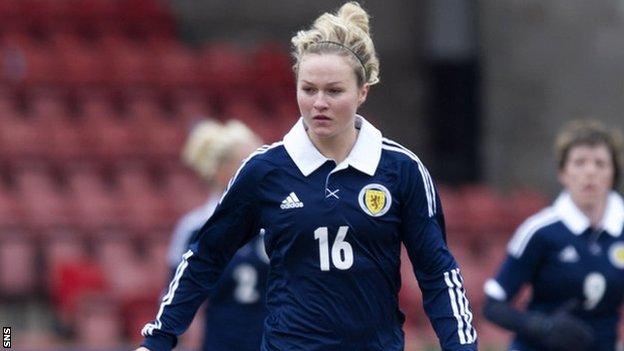 Scotland warmed up for their meeting with Germany later this month by defeating European Championship finalists Iceland in Reykjavik.

Iceland have only lost once before at home since 2006.

Two goals in two minutes by Leanne Crichton and Emily Thomson had the Scots in control after 13 minutes.

Sara Bjork Gunnarsdottir pulled one back, but Leanne Ross restored the advantage before half-time, after which Holmfriour Magnusdottir replied.

Scotland coach Anna Signeul had been denied the services of several experienced players, including Kim Little, Suzanne Grant and Rhonda Jones, in addition to those on their long-term injury list.

It meant a first call-up for Scotland Under-19 captain Siobhan Hunter and her Scotland youth team-mates, Claire Emslie and Caroline Weir, and all three made their debuts from the bench at Laugardalsvollur National Stadium.

For Celtic's Thomson, it was her first international goal in her fourth appearance.

While Iceland will have to regroup for the Uefa Women's Euro finals in Sweden this summer, the Scots will go into their match against Europe's top-ranked side in Essen on 15 June with renewed confidence.

That is the latest friendly game ahead of the Fifa Women's World Cup qualifying campaign, which kicks-off against Faroe Islands in September.