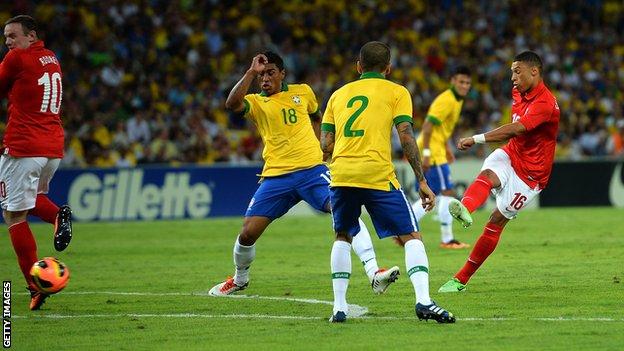 Alex Oxlade-Chamberlain pulled England level after Fred's goal in Rio, before Wayne Rooney put Roy Hodgson's side into the lead, only for Paulinho to make it 2-2 late on.

I only realised he'd scored when his agent rang up

After the game Chamberlain, part of the last England side to win in Brazil in 1984, told BBC Radio 5 live: "I didn't see it. I was dropping his mother off at the airport at 6am this morning so I fell asleep."

But he added: "I've had loads of texts saying it was a fantastic goal. It was on tape so I'll watch it in a minute."

Ahead of England's draw in Rio, 19-year-old Oxlade-Chamberlain had spoken of emulating his father's side's victory, when Mark Hateley and a John Barnes wonder-strike gave the visitors a famous win.

The Arsenal youngster went on to admit he had never seen footage of that game.

Speaking after Sunday's match, he said: "I'm sure my dad will be happy with that. I can't really remember it [my goal].

"Frank Lampard flicked it on, I got it back off Wayne Rooney and just hit it.

"I'm just glad I could make a contribution. We wanted to close the game out so we are disappointed we didn't but we showed great passion and fight. Brazil are a great side but we kept our shape."

Chamberlain said he only realised his son had scored when the teenager's agent called him to tell him.

He added: "I was watching the game. It was a bit negative in the first half but England were more positive in the second half and Alex played well in the hole behind the strikers.

"He plays wide right, but that's his third-best position; midfield or playing behind the striker is his best position."

Later, after hearing his father had missed the goal, Oxlade-Chamberlain said: "Did he fall asleep? That sounds like him!"