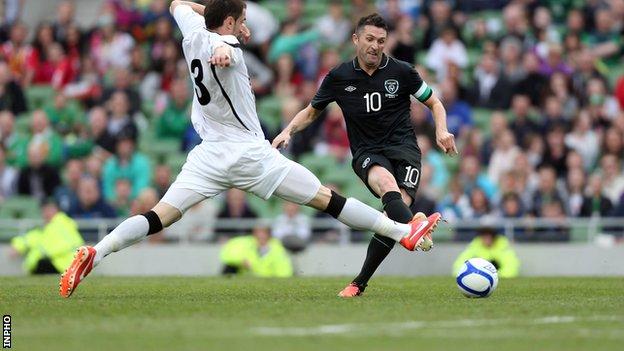 Robbie Keane expressed his delight at equalling the Republic of Ireland's all-time appearance record in Sunday's 4-0 friendly win over Georgia.

Keane, 32, scored two late goals after coming on as a substitute to equal Shay Given's record of 125 caps.

"If you had said to me 10 years ago I would get that many, I would have said you were crazy," admitted Keane.

"Obviously I am delighted and I'm sure I will look back in years to come on it - hopefully I will get a few more yet."

Republic manager Giovanni Trapattoni paid tribute to Keane, saying: "It is a beautiful moment for him.

"Robbie was destined. He started to play as an 18-year-old and was one of the youngest creative players in Ireland.

I offered Robbie the armband at half-time but he said 'no, you keep it.' It is nice for me and my family

"There are players who feel goals, and Robbie is one of these players. He will be a great for Ireland because in the future he will continue and in the next game, he will have the most caps."

The Republic of Ireland now face Faroe Islands at the Aviva Stadium on Friday evening, with Keane expected to lead the team.

And the Los Angeles Galaxy forward believes there is no room for complacency against one of Europe's minnows.

"Everything has gone well this week but Friday's qualifier is the important match," he added.

"People will expect us to win and on paper we should, but we cannot take them too lightly."

On Sunday, Georgia played with 10 men from the 20th minute following the dismissal of goalkeeper Giorgi Loria for a foul on Ireland captain Shane Long.

Long is suspended for the Group C qualifier against the Faroes in Dublin, so instead will be looking forward to getting married later this month.

"It was an unbelievable honour to skipper the team," said the West Brom striker.

"I offered Robbie the armband at half-time but he said 'no, you keep it.' It is nice for me and my family."