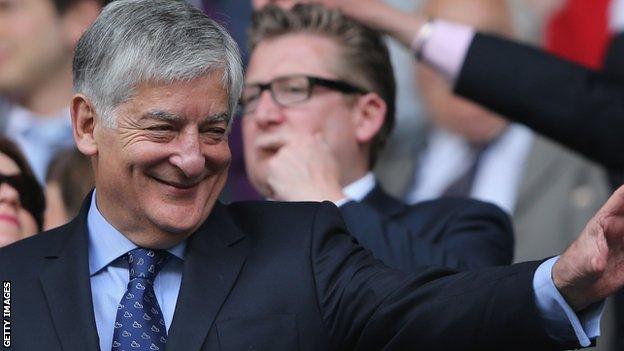 Bernstein, 69, who steps down in July, said only 30% of players in the top flight were eligible for England compared to more than 50% in Germany.

He said: "The number of English players in the Premier League and the Football League is a really important matter.

"We desperately need to increase the pool of real quality players."

Bernstein, who has been forced to relinquish his post when he reaches 70 under FA rules, said work was already under way to address the problem.

"All the work we are doing, such as in youth development, is aimed at doing that over the next few years and it's great to see some very good players coming through now such as Jack Wilshere. There are some coming through but we need many more."

Meanwhile Bernstein expressed his confidence that, under manager Roy Hodgson, England would qualify for the World Cup in Brazil next year.

Hodgson's men are currently second in their qualifying group, two points behind Montenegro after six matches.

Bernstein said: "It is desperately important we are in those World Cups and Euro Championships. We have done OK in qualification so far, we are not first but we have games ahead that are definitely winnable. They are good sides, this is a tough group.

"I believe we are moving in the right direction and I am sure Roy will deliver the goods."