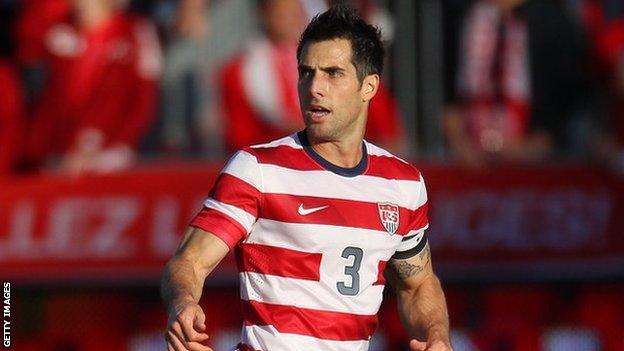 The defenders went on loan to Racing Santander and Spezia respectively while Rangers were winning Division Three.

Whether they will be keen to play in Division Two against mainly part-time opponents remains to be seen.

"At this moment in time, I think they'll be joining us for pre-season training on 24 June," said McCoist.

McCoist also wants goalkeeper Neil Alexander to make a decision this week about whether to accept a new one-year contract on reduced terms.

The manager wants the 35-year-old to jostle with fellow Scotland fringe man , for a starting place while the inexperienced Scott Gallacher is sent out on loan.

"There was an offer put to Neil which is still on the table and I know he's off on holiday at the moment in Florida," McCoist told his club website.

"We get back to Glasgow first thing on Tuesday morning and these will be the kinds of things I'll be pushing over the line one way or another."

Bocanegra and Goian joined Rangers for the 2011-12 Scottish Premier League season, the American from St Etienne and the Romanian from Palermo, but were farmed out after financial collapse led to the bottom tier.

McCoist told an audience of Rangers fans in the United States that despite competing domestically in Scotland's third tier.

He said that, as far as he knew, the 34-year-old United States international Bocanegra and his 32-year-old former defensive partner would see out the last year of their contracts.

"Until I hear anything otherwise, that's great," said the manager. "Let's be honest about it - they are two international-quality centre-backs and I'd be delighted if they came back.

"I'd be very hopeful and we'll certainly know in the next couple of weeks if the boys are coming back. If they are, I'll be delighted."

Meanwhile, McCoist has welcomed the appointment of former Rangers manager Walter Smith, to whom he was assistant, as the club's new chairman.