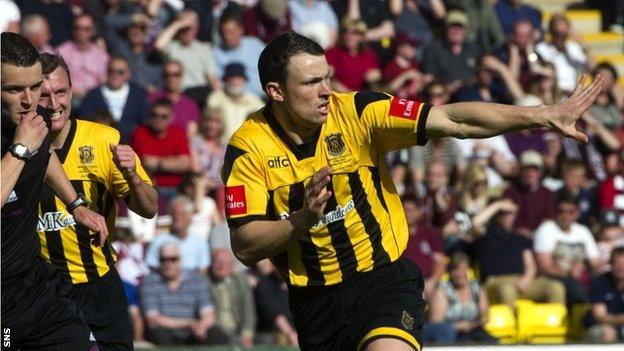 Auchinleck Talbot deservedly lifted the Scottish Junior Cup for the 10th time thanks to a 76th-minute winner from David Gormley against Linlithgow Rose.

In the game between the league champions from the East and West Superleagues, the Ayrshire side had the better of the chances.

The defeat at a packed Almondvale Stadium marked an end to Linlithgow's 50-game unbeaten run.

Talbot made up for last season's defeat in the final by Shotts Bon Accord.

Winning the league and getting a call-up for Junior Scotland and now this, it has been an amazing season

Match winner Gormley had been surprisingly left out of the starting line-up by manager Tommy Sloan but was delighted just to have the chance to make his mark as a substitute.

"I did not think I would be playing in this game as I had a knock on the ankle," the striker told BBC Alba.

"But the manager said just go on and see what you can do. To get the winner, I am speechless.

"Personally, winning the league and getting a call-up for Junior Scotland and now this, it has been an amazing season."

Both sides were already assured of a place in next season's senior Scottish Cup after winning their respective leagues, while both could be candidates to be invited into a should the Scottish FA's proposed pyramid structure .

But, despite Rose being packed with players with senior experience as they sought to lift the trophy for a fifth time, it was Talbot who suggested they were better equipped to blossom among the big boys.

Their more direct approach might not be as pretty as their east region rivals' more considered style, but it proved to be effective as Rose were put immediately under pressure.

Colin Spence should have done better than slice wide when presented with a sight of goal from the edge of the penalty box.

When former Cowdenbeath goalkeeper David Hay could only parry the midfielder's header, Graham Wilson fired over when he too should have at least found the target.

Rose weathered the early storm, but they failed to bloom in the late afternoon heat and a Stuart McArthur drive from distance that was well held by Andrew Leishman was as near as Mark Bradley's side came during the first half.

The lull in the goalmouth action continued after the break, although Wilson shot wide for Talbot, while a Tommy Coyne header looped past the upright at the other end.

Spence was again profligate when he lashed wildly over from 12 yards, but it spurred Auchinleck to take advantage of a growing nervousness in the Linlithgow defending.

James Latta had a close-range shot beaten away unconvincingly by goalkeeper Hay and then sent an 18-yard drive flashing across the face of goal.

Hay again looked suspect as Gormley weaved his way into the box from the by-line before his little sidestep deceived the goalkeeper with ease as he fired in off the crossbar from 16 yards.

Rose never looked like recovering from that blow as Auchinleck finished the stronger and came close to extending their lead.

A low Keir Milliken drive slipped under Hay but off the face of the post before being cleared then the goalkeeper redeemed himself slightly by tipping a powerful Gormley effort over the crossbar.

However, the substitute's goal was enough to ensure that the Cup would be heading back along the M8 to Ayrshire.