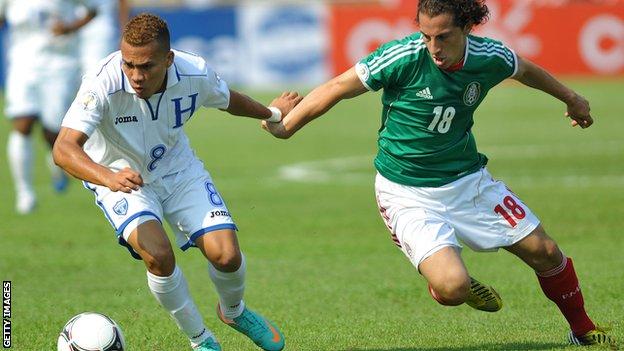 Rangers manager Ally McCoist says he is closing in on the signing of Honduras midfielder Arnold Peralta and a return for former Ibrox defender Stevie Smith.

The 24-year-old Peralta, currently with Vida in his homeland, has agreed terms with the Division Three champions.

Smith, the 27-year-old most recently with Portland Timbers, has been training at Ibrox for several months.

"There's definitely an interest in Stevie. We are close now with Arnold too," McCoist told Rangers' website.

"We went over and watched him playing for Honduras against Panama and he performed well.

"There were one or two players in that game who impressed us and terms have been agreed with Arnold, so hopefully in the next three or four days we can push that one through.

"He will certainly give us a bit of bite in the middle of the park. He actually played at right-back when we saw him, but his best role is sitting in midfield.

"Of all the players we lost a year or so ago, the best part of 20 of them were internationals and we've got a few in our squad again now.

"It's our aim as a club to provide as many players for international duty as we can and, in our progress back to where we want to be, that'll be an indication of how far we're coming.

"It's great we are hopefully signing a Honduran international who is of a good pedigree and playing in World Cup qualifiers."

While Peralta has played 13 times for his country, one Scotland B cap is as much as Smith has gathered so far.

After coming through the youth ranks at Ibrox, Smith made 74 appearances for Rangers before moving to Norwich City in 2010.

He failed to become a regular during an injury-hit spell at Carrow Road and, after a loan spell with Aberdeen, switched to Preston North End a year later then spent 2012 in Major League Soccer.

Smith has been back in Scotland since the end of last year and Rangers say he decided not to pursue an option to remain in the United States.

"It's good to have players who have experience and who know the club so that we, as staff, can rely on them to go and play," said McCoist of Smith.

"He certainly ticks the boxes and he's a very fit lad. I felt sorry for him when Walter Smith was the manager because he had one or two injury problems, but they are all gone now.

"They've totally cleared up and he has been training well, so he's a player we'd like to come in. He's got strength and good experience, so I'd like to sign him."