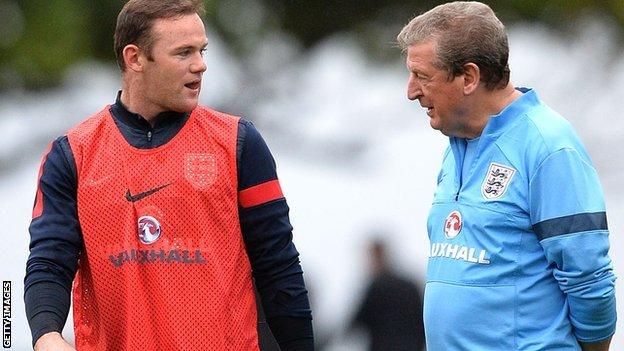 Rooney's request to leave Old Trafford was rejected by Sir Alex Ferguson and the striker is expected to hold talks shortly with his successor David Moyes.

The 27-year-old will win his 83rd cap against Brazil in the Maracana.

"I haven't followed all of his games for Manchester United. I have seem some and am aware he's missed some matches but I thought his performance against Republic of Ireland (on Wednesday) was very good. He played well and was very active.

Asked if there was still more to come from Rooney, who has scored 35 goals for England, Hodgson replied: "Why not? He's got a lot of years ahead of him, so why not?"

The forward will be central to Hodgson's planning in the Maracana after Danny Welbeck was ruled out with a knee injury, while Liverpool's Daniel Sturridge did not fly to Brazil after damaging ankle ligaments in Wednesday's game.

"There are lots of options and we've got enough players to have options," added Hodgson. "We could play Jermain Defoe and Rooney or even Theo Walcott and Rooney.

"The other option is to play Wayne or one of the others up there on his own and bring someone extra into midfield. We want to keep our wide players like we had the other night."