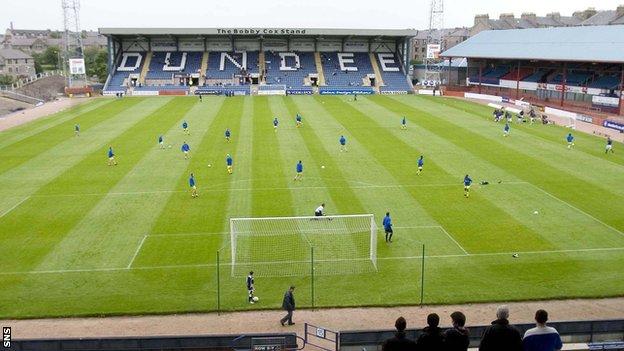 The fans group represented on the Dundee board wants supporters to approve an investment offer from Keyes Capital, worth £650,000, subject to due diligence and a ballot of its members.

But, after a meeting at Dens Park, the Society believes the deal can be done.

It said on Saturday it hopes the three directors will now return to the board.

Colvin stepped down on Wednesday along with Steve Martin and finance director Ian Crichton.

Dundee is a fan-owned club. The Society has 51% of the shares and holds three of the six positions on the club's board, held by Maurice Kidd, Dave Forbes and Fraser MacDonald.

Kidd believes progress had been made with businessman Colvin, who will also invest more in the First Division club if the Texans' offer is accepted.

He and his fellow fans group representatives are now recommending the deal to the general fan base, who will be balloted.

"Last night we reached the point where we thought a deal could be done and I contacted fellow club board and Society board members to update them," said Kidd after the Saturday morning meeting at Dens Park.

"The club board has unanimously always felt there was merit in the bid and it should be considered.

"All parties are now agreed that due diligence should be done, a ballot of Society members held and a general meeting of club shareholders held.

"A heads of terms and conditions document will be sent to Bill.

"Having gone through those verbally with him, although there has still to be negotiations on, for example, the number of Society seats on the new board, no major obstacles are envisaged.

"The bid has been moved on primarily because of the personal assurances given by Bill regarding his long-term vision and commitment to the club.

"Bill will also give an undertaking to give the Society first option on his shares at the price he paid with no profit to himself."

A further sum of around £850,000 was earmarked for buying Dens Park back from current owner John Bennett. That proposal is not part of the revised offer, but is likely to be revisited in the future.

Asked what he thought the money would do for the club, Kidd said: "It helps beef up the youth system.

"We'd recruit additional scouts and coaches. It allows the manager to possibly significantly improve the team for the forthcoming season.

"We're all Dundee supporters and we all want to see the best team on the park."

Kidd revealed the fans group would be having discussions with the three directors to bring them back into the fold.

And he felt the enthusiasm for the Texans' deal shown by two of them in particular has helped to ease concerns about the investors' motives.

He said: "Whilst not so much is known about Keyes Capital, comfort is provided by the fact that a current director, namely Bill Colvin, will have invested almost £0.5m once the deal is done, and the fact that an existing local club director, Steve Martin, is also investing."

The ballot to vote on the matter is expected to take up to four weeks but due diligence can be completed quickly to comply with the society's requirements.

Keyes Capital, who are based in Texas, are understood to be satisfied with the timescales involved.