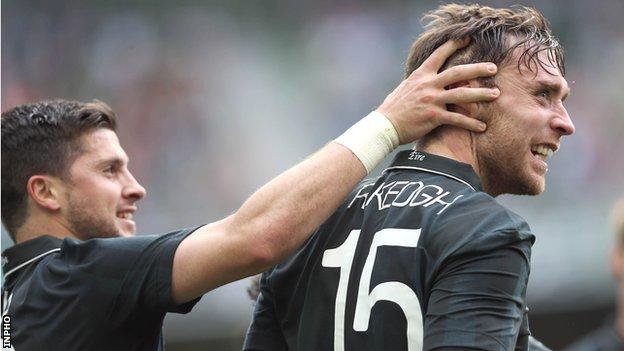 The Republic of Ireland warmed up for Friday's World Cup qualifier with the Faroe Islands by brushing aside 10-man Georgia at the Aviva Stadium.

Georgia keeper Giorgi Loria was shown a straight red card on 20 minutes after upending Shane Long as the striker raced through on goal.

Richard Keogh headed the hosts ahead just before the break and Simon Cox slotted in to make it 2-0.

Long and James McCarthy were the only starters from the team which drew with England on Wednesday.

Georgia were first to threaten in front of sparse Dublin crowd when Nikololoz Gelashvili, from an acute angle, failed to hit the target with keeper Keiren Westwood stranded.

Long should have put the hosts ahead on 15 minutes, breaking clear after hesitancy in the Georgia defence but his shot was saved by Loria.

The West Brom striker was alert again to intercept Ucha Lobjanidze's weak backpass, and this time Loria brought down Long and the referee had no option but to send the keeper off.

Jano Ananidze was sacrificed for replacement keeper Omar Migineishvili, who was quickly in the action to push over a James McClean free-kick.

Long volleyed just wide while Murtaz Daushvili was lucky to escape punishment for a two-footed tackle on Richard Keogh.

Keogh brought a low-key affair to life with his first international goal three minutes from the break.

McClean swung in a free-kick from wide and the Derby defender, who was making his first start for the Republic, headed down with the ball taking a bounce before rising high into the net.

Sunderland winger McClean was again the provider for the second goal three minutes after the restart, with his low cross fired in at the backpost by the unmarked Cox.

Long wasted another excellent chance 10 minutes later, latching on to Wes Hoolahan's through-ball but his low shot was blocked by the advancing Migineishvili.

Republic defender Richard Dunne was brought on midway through the second half to make his first appearance in almost a year following a groin injury.

Keane, equalling Shay Given on a record 125 appearances for the Republic after coming on as a half-time substitute, punished another defensive blunder from Georgia on 77 minutes.

A blocked clearance fell to Conor Sammon and his pinpoint cross was cushioned home by the Republic's record scorer.

Jeff Hendrick set up Keane for his 56th goal for the Irish two minutes from time, winning possession in midfield and slipping in the striker to side-foot into the bottom corner.